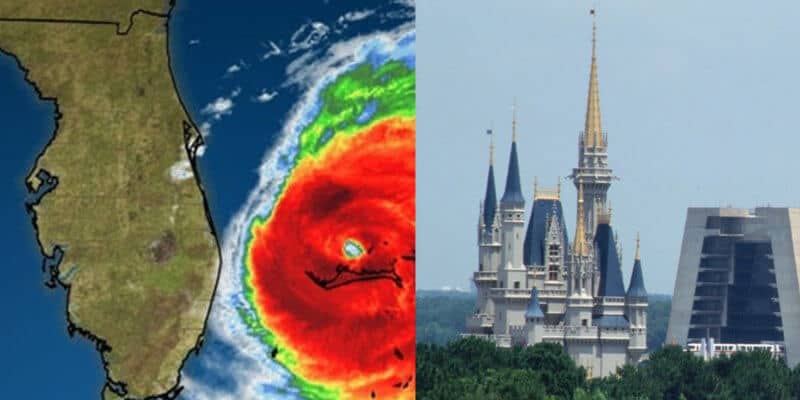 In a new report by the National Hurricane Center advisory, Hurricane Dorian has now decreased its threat to a category 2 as it slowly moves along Florida’s coast, which reduces its threat against Walt Disney World guests.

Sustained winds for Hurricane Dorian have now fallen to 110 mph, down from the storm’s more recent speeds of 130 mph in the late afternoon/early evening of Monday. However, with the positive news of the storm’s decrease in wind speeds, reports say the hurricane is growing in size with hurricane force winds extending outward up to 60 miles and tropical storm force winds extended outward of 175 miles.

Today the storm has finally begun to pull away from the Bahamas, where it’s been reported to have caused extreme damage and flooding, and is on its path along Florida’s coastline.

According to Fox 35, the storm is projected to turn toward the north by Wednesday evening, followed by a turn to the north-northeast on Thursday morning. If Dorian follows this path, the hurricane could stay off of Florida’s coastline completely.

Currently, reports show Dorian moving dangerously close to Florida’s east coast late Tuesday through Wednesday evening. For guests staying on or around Walt Disney World property, the storm is not expected to bring hurricane force winds to Orlando as only a tropical storm warning is in effect for the area. For those not familiar with tropical storms, they can see winds ranging in speeds anywhere between 39 to 73 miles per hour.

Earlier reports discussed a possible curfew to go into effect for Orange County. However, the Orange County Sheriff’s Office has revealed that no curfew will go into effect as Dorian edges closer. Although, they do still strongly encourage everyone to stay safe and indoors as winds increase throughout later today and into the evening.

NO CURFEW: @SheriffMina and @OCFLMayor announce there will be NO #curfew for Orange County as #Dorian edges closer. We still strongly encourage everyone to #StaySafe and stay indoors as winds increase throughout the day and evening. pic.twitter.com/6S0WG8ESaC

As we reported yesterday, the Walt Disney World parks are still set to close earlier today on account of Dorian. Additionally, for guests looking to depart or arrive in Orlando, Orlando International Airport is still ceasing all commercial flight operations until further notice.

Comments Off on Hurricane Dorian downgraded to Category 2 – Will Disney World be spared?