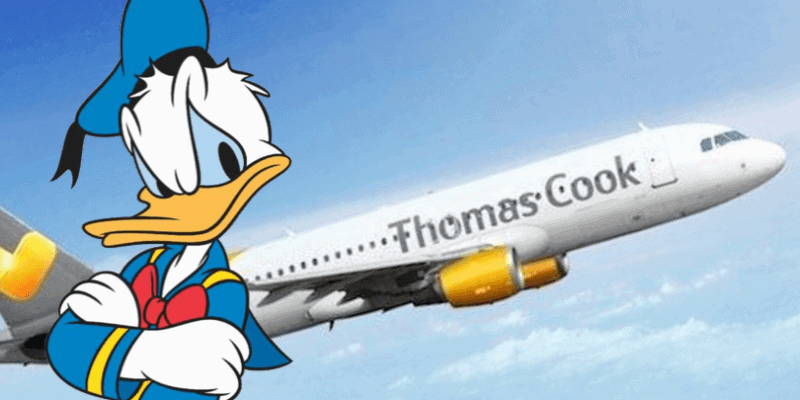 Walt Disney World vacationers and others on trips to Orlando were left stranded without flights home due to the collapse of the Thomas Cook travel company.

Recent reports indicate that since the British tour company failed to secure emergency funding, hundreds of thousands of travelers have been stranded abroad, many of whom were left in Orlando without flights to return home from their Walt Disney World vacations.

According to the Civil Aviation Authority, Thomas Cook has ceased trading, its four airlines will be grounded, and its 21,000 employees across 16 countries will lose their jobs.

With Thomas Cook transporting around 270,000 passengers every year to Orlando from the U.K., this has a huge effect on Walt Disney World vacations. Orlando International Airport is currently urging those who had booked flights through Thomas Cook to book alternative flights before arriving at MCO.

USA Today also reports that approximately one million travelers will find that their future flights and reservations for upcoming vacations booked through Thomas Cook will now be canceled if they haven’t been already.

One couple, Rhia Presley and Jason Forsythe from Cardiff, U.K., are engaged to be married next summer. Instead of spending money on a large wedding, Presley and Forsythe opted for a small ceremony and a family vacation instead. The couple booked a vacation to Walt Disney World for themselves and their three children for a trip immediately following their July wedding. But because they booked through Thomas Cook, they have now lost thousands of dollars.

“It took a lot for us to get this money, and now it is gone, we are devastated,” Presley said.

The couple had not purchased travel insurance for the thousands of dollars in flights they had booked through Thomas Cook, a travel firm that has been around since 1841.

“I thought there was no way we would have to panic about covering ourselves nine months in advance,” Presley added. “I was on the phone to [Thomas Cook] a couple of days ago and I was told that I had nothing to worry about. They said it was the packages that were going bust, they said the flights would not be affected. I asked them again and again if our flights would be okay. I said I can’t afford to have this happen to us.”

As of now, it’s unclear if this family or others affected by the Thomas Cook collapse will be able to receive refunds on their flights or other travel bookings.