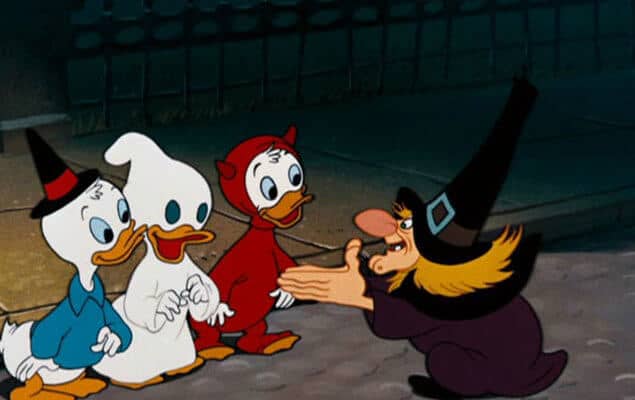 From pumpkin carving to haunted hayrides to scary movies, Halloween season is a favorite among many. Walt Disney World has already been celebrating with spooky treats, specialized merchandise, and of course the fan favorite, Mickey’s Not-So-Scary Halloween Party.

But just because you aren’t visiting WDW doesn’t mean you, too, can’t celebrate Halloween in Disney Style. We came up with a list of Disney Halloween favorites that the whole family can enjoy and are guaranteed to get you in the spooky spirit.

“The Legend of Sleepy Hollow”

This comical ghost cartoon tells the story of Ichabod Crane and his attempt to win over Katrina Van Tassel, but he isn’t the only one in Sleepy Hollow who has his set on her. Brom Bones is known for his bold personality, love for pulling pranks, and horseback riding skills. Brom learns of Ichabod’s superstitions and decides to use this to his advantage, pushing Ichabod out of the picture and getting the chance to have Katrina all to himself.

Gather around and let Brom Bones tell the legend of the Headless Horsemen in a catchy yet spooky jingle, sung by legend Bing Crosby.

It’s Halloween night at the House of Mouse which means a lot of villains are piling in, but it isn’t to sit and enjoy the House of Mouse. Jafar has a trick up his sleeve for Mickey and the gang, but the villains have to wait until midnight. What could it be?

Enjoy a series of Mickey Mouse shorts along with a special villainous twist in this family-fun cartoon.

Disney has a series of Sing-Along Songs from “Disneyland Fun” to “Beach Party” to the Halloween favorite “Happy Haunting.”

Dance, sing, and join the festivities along with all of your favorite Disney characters as they prepare for the perfect Halloween Party at Disneyland. From pumpkin carving to bobbing for apples to cooking with Goofy, this sing-along is fun for all ages and will bring the family together for a party you’ll never forget!

“The Nightmare Before Christmas”

Christmas or Halloween. It doesn’t matter thanks to the Pumpkin King.

Jack Skellington lives in Halloweentown, but soon he becomes bored of the same annual routine. He decides to venture off and stumbles upon Christmastown, with bright colors and warm spirits that bring out a new side of Jack that he never new existed. But what happens when he plots to control Christmas and kidnaps Santa Claus? Find out in this beloved 1993 Disney film.

Comedy. Horror. Fantasy. This 2003 film is a based on the Disney attraction and stars Eddie Murphy, Marsha Thomason, Aree Davis, and Marc John as the Evers Family.

Jim Evers is a workaholic, neglecting his wife and children. He wants to prove that he is a loving and caring father despite being overwhelmed with his work, so he takes the family on a special vacation, but along the way he makes a pit stop at a mansion that he has interest in selling.

Of course, this isn’t an ordinary mansion and before the Evers Family realizes, they have to try and break a curse and save their family.

It wouldn’t be Halloween without the Sanderson Sisters!

A teenager, Max, and his sister, Dani, recently moved into a new town. They befriend a young girl, Allison, and venture into an abandoned house. Allison tells a spooky story, which Max ends up dismissing. But what he doesn’t realize is that when he dismisses this superstition, he releases three wild witches: Winifred, Sarah and Mary.

The Sanderson sisters return to 17th-century Salem in the house they used to live in, and now with the help of a magical cat, the kids must steal the book of spells to stop them from becoming immortal. But be careful, because if you are caught, the Sanderson sisters will put a spell on you.

These are only a select few of the many Disney Halloween classics to choose from. What are you waiting for? Heat up some apple cider, grab a cozy blanket, and gather around the T.V. with the family for some Disney Halloween fun.

Which Disney Halloween classic is your favorite?