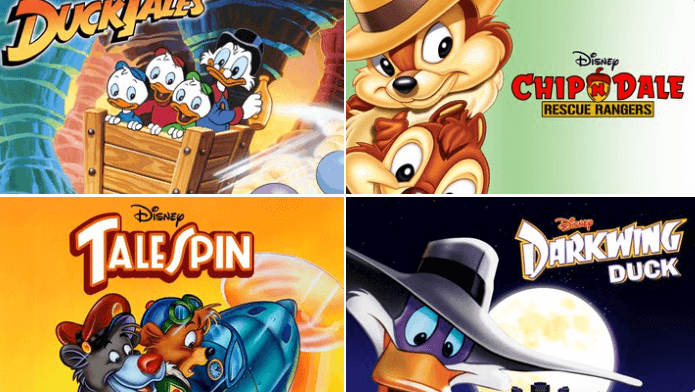 Get ready 90s kids! The entire Disney Afternoon you knew and loved will be available on Disney+!

On this day in 1990, Disney Channel launched the iconic two-hour lineup which featured “Ducktales” (oo oo hoo!), “TaleSpin,” “Rescue Rangers,” and “Darkwing Duck”! Now 29 years later to the day, Disney has announced our favorite afternoon adventures will return on what is already arguably the most legendary streaming service to break the internet. And of course, Disney made the announcement the only appropriate way:

Nobody:
Us: OUR IDEAL AFTERNOON SCHEDULE IS

It’s not a stretch to say this lineup helped mold a generation of Disney fans. Highlighting Disney Channel’s golden age–before the live-action sitcom takeover–these cartoons reimagined classic Disney characters in ways that were so original yet so true to the essence of themselves.

Who would’ve thought to have Baloo–the happy-go-lucky sloth bear from “The Jungle Book”–get behind the yolk of a seaplane and live the life of a daring bush pilot? Who can–or would want to–forget seeing an “Indiana Jones” Chip paired with a “Magnum PI” Dale? Who would think that Mr. Scrooge would find any purpose outside of “Disney’s A Christmas Carol”? And who wasn’t grateful to begin to finally tell the difference between Huey, Dewey, and Louie Duck?

These shows also introduced us to amazing new characters that were able to stand toe-to-toe with the classic stars. Suddenly we wanted to go on adventures with Launchpad McQuack, Gadget, and Monty. And then came Darkwing Duck. A spinoff of :Ducktales,” we got dangerous with Drake Mallard’s nocturnal alter ego with the help of Launchpad and Mallard’s adopted daughter Gosalyn.

Together, all four of these shows created and expanded its own Disney universe before universe-building was cool. They all inspired us to seek adventure, help others, be true to ourselves, and follow your gut (save for when Monty would go in his cheese-seeking trance). While “Ducktales” was lucky enough to get a reboot and offer the chance for the return of all our favorite shows, we will now have a chance to unleash our 90s nostalgia once again and introduce a new generation to the classic treasures we actually grew up with.