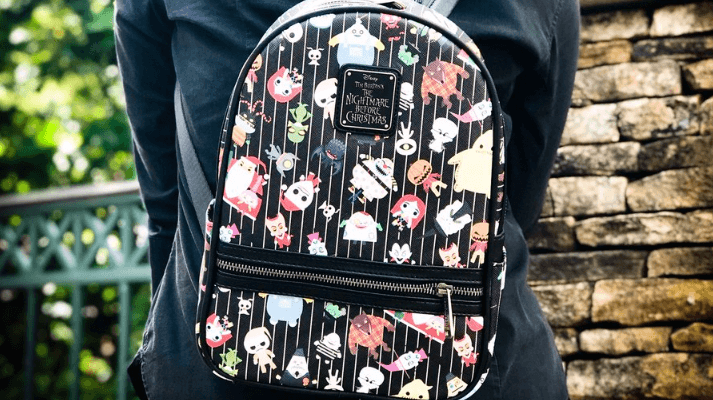 Is there anything better than Disney Parks accessories themed to our favorite seasons? We don’t think so! We love creating outfits inspired by our favorite Disney themes, characters, and attractions, and the latest Disney movie-inspired bag by Loungefly is a must-buy for any Tim Burton or Disney Parks fan like us.

Disney and Loungefly have released their newest collaboration inspired by Tim Burton goodness, and this one has got to be the best we’ve seen yet! The new bag is themed after “Nightmare Before Christmas” and we’ll be rocking it all Halloween and Christmas long.

Anyone else got Halloween on their mind? ?We're counting down the days to Mickey's Not-So-Scary Halloween Party! Check out this new "Nightmare Before Christmas" backpack now available at Ever After Jewelry Co. & Accessories. ? #ShopDisneySprings pic.twitter.com/3wwOceD0Uf

The best thing about “Nightmare Before Christmas” is the fact that we can see it present in the Disney Parks throughout two of our favorite Holiday seasons: Halloween and Christmas! From the “Nightmare Before Christmas” overlay on Haunted Mansion (appropriately called Haunted Mansion Holiday) at Disneyland to the fireworks hosted by Jack Skellington at Walt Disney World, it seems Disney Parks enthusiasts will have all the Pumpkin King festivities they could ever want. And this bag is the perfect accessory to rock to these fun events!

You can pick up this “Nightmare Before Christmas” Loungefly bag at select merchandise locations throughout Disneyland Resort and Walt Disney World Resort, namely Ever After Jewelry Co. at Disney Springs Florida and The Dress Shop at Downtown Disney in California. So far we haven’t seen the bag available online yet, but we’ll keep you updated.

If you’re not a “Nightmare” fan but you still want to rock a fun Loungefly bag, not to worry! Disney has collaborated with the accessories line for years to release some pretty magical designs, from bags inspired by the Disney castles to some epic “Star Wars” merchandise we love rocking in the parks. You can shop plenty of Disney Loungefly accessories online at our Inside the Magic store here.

Which Disney-inspired Loungefly design is your favorite? Let us know in the comments!