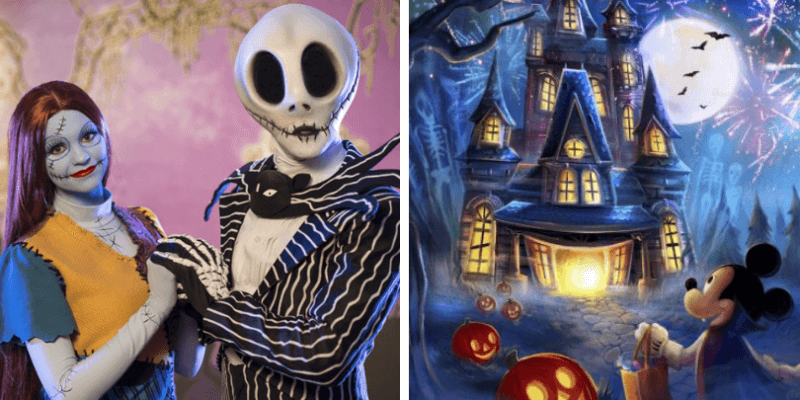 Hey, Halloween fans! Disney just announced some all-new frightfully fun offerings making their debut at Mickey’s Not-So-Scary Halloween Party this year. If you thought you knew what to expect at this favorite seasonal event, you’ll want to buy your tickets as soon as possible because this year’s party will bring more happy haunts than ever before. A Jack Skellington-hosted fireworks show, epic attraction overlays, and amazing treat trails? Sign us up!

That’s right: there’s an all-new fireworks extravaganza in celebration of the Halloween season, and Jack Skellington himself is the star. The fireworks show, called Disney’s Not-So-Spooky Spectacular, is more exciting than any other Disney Halloween fireworks we’ve ever seen. It features projections, lasers, lighting, and of course amazing fireworks that light up the sky. Here’s how Disney describes the Not-So-Spooky Spectacular:

Jack has come to tell a not-so-scary story about how anything can happen on Halloween night. Jack’s ghost dog, Zero, then flies off carrying everyone along on a trick-or-treating adventure, where four friends – Mickey, Minnie, Donald and Goofy – find themselves drawn into a mysterious haunted house. Their journey takes them from one room of the house to another, encountering dancing skeletons, waltzing ghosts and a whole series of troublemaking Disney villains.

If you’ve attended Mickey’s Not-So-Scary Halloween Party in the past, you know that the fireworks are just one fun element of the entire night. This year, plenty of attractions are joining the fall festivities. In Tomorrowland, follow the Treat Trail into Monsters Inc. Laugh Floor, where the cast of monsters will interact with guests in new ways to learn about the human holiday of Halloween. Space Mountain will also go completely dark again this year and take guests on a journey with an all-new rock soundtrack.  In Adventureland, a crew of swashbuckling pirates will join you on your adventures through the Pirates of the Caribbean attraction, adding even more mischief to your night. And in Fantasyland, special lighting and projections transform the Mad Tea Party into an attraction that will leave guests in the Halloween spirit.

Don’t worry, Halloween fans, because returning favorites will be back again for the parties this year. You can still expect to see Hocus Pocus Villain Spelltacular on the Cinderella Castle stage, the ride of the Headless Horseman, greeting you in the night, the epic Mickey’s Boo to You Halloween Parade, the Monstrous Scream-O-Ween Ball, and of course Disney Junior character meets at Storybook Circus Disney Junior Jam and other amazing character encounters throughout the park.

Disney parties have so much to offer fans of all ages, and with all of the new happy haunts coming to Mickey’s Not-So-Scary Halloween Party this year, you won’t want to miss out.

What’s your favorite special event to attend at the Disney Parks? Let us know in the comments!