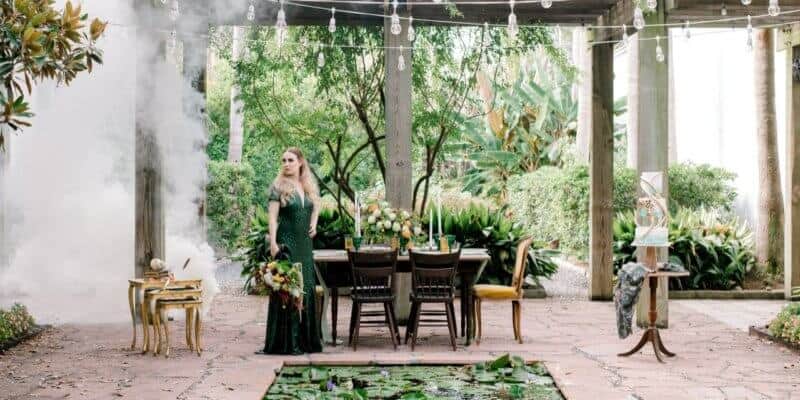 There is an endless amount of themes one can choose for their wedding. However, none are as enchanting and spellbinding as “Harry Potter.” And of the many creatures and houses within the series, we all know Slytherin has an impenetrable sense of style. It may be dark and grim but it’s also over the top and grand and comes to life in this new series of images in an exceptional way.

This wedding-themed photoshoot, shot in part by Brianne Hardcastle, shows us muggles what a truly magical wedding should look like. It captures the wicked and witchiness of Slytherin while also offering all of the necessities a wedding should bear, which is what the photographers had in mind when creating it. “This shoot will entice anyone who is inspired by the magical world of Harry Potter and loves the dark and moody feel with a touch of light and airy elegance,” said Brianne.

Perfectly fitting for Slytherin, the decor of the space features the color scheme of the rich and royal green the Hogwarts house wears proudly. This can not only be seen in the grand scheme of the shoot but also in the little details.

In the place settings, Brianne continued to draw inspiration from the house’s color of choice, while also throwing in other complimentary colors. Some of which, include yellow, orange and purple, which all come together to transform the bewitching place settings to what we would imagine being similar to those of Lucius Malfoy.

Beyond the place settings with plates that feature the house’s logo, others include clear plates with gold beaded edges and the implementation of other themed elements. These include gold-flecked chocolate frogs, jewels, and your very own wand.

And of course, what wedding wouldn’t be complete without a cake? But of course, the cake for this wedding also utilizes the bewitching theme of the house with its use of a gold snake that wraps around all three tiers of the delicious looking dessert.

No Slytherin celebration could be complete without bubbling cocktails, which are also colored after the house. These are joined by other themed elements that further play up the house known for its dark arts.

We know what you must be thinking now. Well, what wedding dress did they choose for this dark and elegant affair? Of course, none other than a dramatic emerald-green sequin gown.

And to really complete the look, the bride’s bouquet featured matching florals found in the table’s centerpiece.

What are your thoughts on this Slytherin-themed wedding photoshoot? let us know in the comments below!