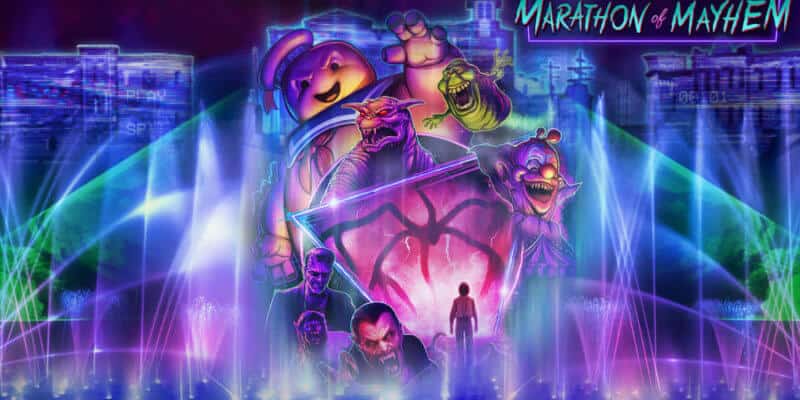 Now just weeks away from opening night, ” Halloween Horror Nights nudges nightmares while teasing of terror to come for 2019. Fall is rapidly approaching and the haunt season will soon be upon us! 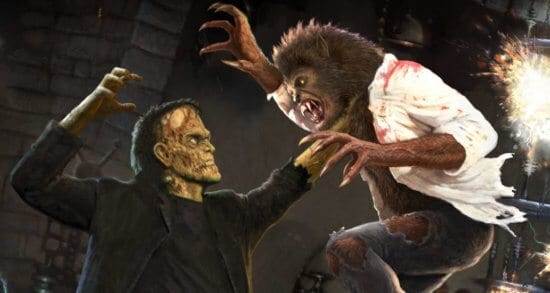 A sure sign the spooky season is sneaking up: some stores are already stocking fall fun (Hobby Lobby). Of course, this means it is time to dig into the seasonal party to die for – Halloween Horror Nights. 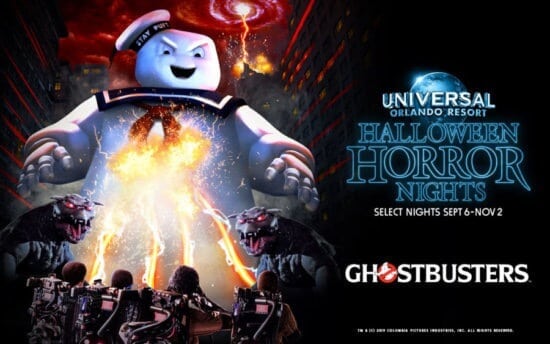 Halloween Horror Nights are the nation’s ultimate spooky season soiree. Expanded event dates exemplify evidence of this popularity. Already the creepy-cool creative minds at Universal have been teasing fans with haunted house reveals, amping up the anticipation for opening night. Listed below is what we know so far.

The last piece of the puzzle just fell into place for Halloween Horror Nights at Hollywood California houses.  An original nightmare from the creative team at Universal, “The Curse of PANDORA’S BOX” escapes on Friday the 13th of September (opening night)!

Ghostbusters materializes at both Hollywood and Orlando this year!!

After a 14-year absence, the Ghostbusters are back at Universal Studios! Halloween Horror Nights welcomes the famous franchise to its fall fear event for 2019.

Confirming rumors of what many believe to be a leaked hint of the paranormal problem solver’s return, Universal announced today that the boys in brown are back! The last time the ghost gathering gurus graced the park as a major attraction was 1996; characters remained for another nine years.

“This year, you’ll experience an all-new haunted house where you will travel back to the small town of Hawkins, Indiana and walk-through some of the most terrifying scenes from Stranger Things 2 and 3.

Not only will you come face-to-face with snarling Demodogs, but you will also make your way through iconic scenes and locations, from Chief Hopper’s cabin to the Starcourt Mall.” –Halloween Horror Nights

Yet another horror film franchise feeds the fear at HHN. “Us” arrives to stoke nightmares on both coasts.

“Featuring the unnerving labyrinth of underground tunnels that stretch from coast to coast below America, to the disorienting and the ominous uprising of “The Tethered”— doppelgängers of every living man, woman and child in the country—the “Us” maze will place guests at the heart of this living nightmare where they quickly realize they are their own worst enemy.

The journey begins circa 1986 as guests follow in the footsteps of the young girl they first meet as Adelaide Wilson as she innocently ventures through a mirror funhouse at the Santa Cruz boardwalk and has a fateful and traumatic encounter with her tethered doppelgänger, an event that will forever alter both of their lives.  The harrowing experience will then transition to present day, thrusting guests into the chaos of “The Tethered” uprising as they emerge from their tunnels to murder their privileged doubles in a nationwide coordinated act of rebellion.”  – Universal Studios

Killer Klowns return! The new maze promises an alarming and aromatic experience at both Hollywood and Orlando locations of Halloween Horror Nights.
“Go beyond the mayhem and madness of last year’s wildly popular scare zone and step right up for an entire haunted house experience based on the cult classic film, Killer Klowns from Outer Space. This new experience will feature a gaggle of new characters including the baby Klowns, Boco, and Klownzilla, as well as new scenery like the Klowns’ circus-tent spaceship, and the cotton candy cocoon storage room where they keep their victims.”   – Halloween Horror Nights, Universal Studios Florida 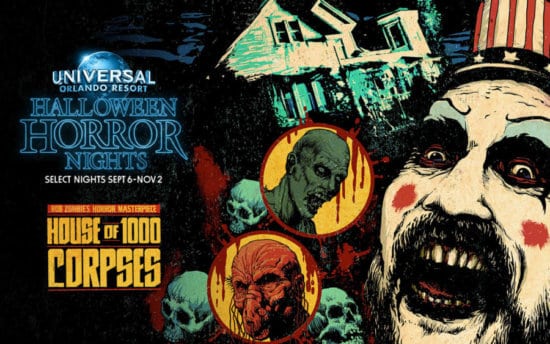 “This fall, you’ll discover firsthand why this house is built on horror. Come face-to-face with the psychotic Firefly family and their collection of blood and gore. Watch “The Legend of Doctor Satan” come to life right before your eyes. Keep a lookout for the latest addition to Captain Spaulding’s Museum of Monsters and Madmen, Fish Boy! And if you’re lucky, you’ll escape the house as fast as a rabbit, minus the fluffy bunny costume and tragic ending.” Halloween Horror Nights Orlando

“House of 1000 Corpses” debuts in Florida on September 6th, making it the second Rob Zombie property to be featured at this year’s Halloween event.  The following weekend, when HHN Hollywood opens, on Friday the 13th. Rob Zombie fans find fear in this gritty and gruesome maze.

Extra Days to Die For

In addition to “Stranger Things,” the following frightfully fun haunts have already been announced:

“In the Ascension Parish Cemetery, it’s normal to find teens playing amongst the tombstones. You’ll find yourself witnessing the repercussions of the disrespectful antics of two teens who have awakened the spirits of the dead. As you roam through the cemetery, you’ll wind through dark mausoleums and decaying piles of coffins.

Ghosts of every shape and form will rise from the tombstones to exact their revenge as you try to escape the maze of crumbling tombstones and mausoleums. Skeletal beings, ghastly apparitions and vengeful spirits will try to drag you to the grave. And in the end, you’ll find out what happened to those who set out to deface the cemetery.” Halloween Horror Nights 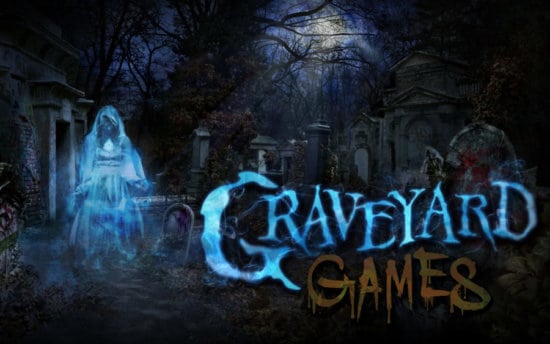 With this wicked wonder, Universal ups the interactive anti! Visit the HHN Facebook page for additional insight:
“Before you enter the haunted house, take the opportunity to chat with a few of the local teens and storytellers of the town. All you need is your phone and open Facebook Messenger to the Halloween Horror Nights page. Here you’ll learn the history and spooky legends the cemetery keeps. Better to be prepared for what awaits than finding yourself coming to a “dead” end.”

Yeti: Terror of the Yukon

Universal revealed a new, bone chilling original haunt: “Yeti: Terror of the Yukon.”  The creature may have been hinted during HHN 2018, with coming soon posters in last year’s amusing dark comedy maze, “Slaughter Sinema.” However, this cave dwelling creature lurks in its own snowy maze for Halloween Horror Nights 2019. 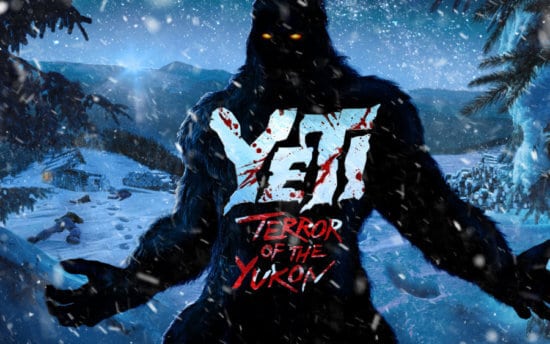 An original concept crafted from the minds of Universal’s haunt experts, this new haunt is sure to receive a cool reception (especially upon entering from Florida’s notorious hot and humid climate).

“Deep in the remote tundra of the Yukon, loggers and trappers seek refuge from the frigid grip of an arctic blizzard. But out in the darkness, a terror lurks far more dangerous than the deluge of snow and ice. These unfortunate souls have intruded into a territory that is haunted by their worst nightmares. Enter a logging camp that’s been torn apart, floors caked with snow, bones and gore.  Right outside, screams are frozen on the faces of those who fled the towering monsters only to succumb to the elements. But there is no escape from beasts as brutal as the winter.” Universal 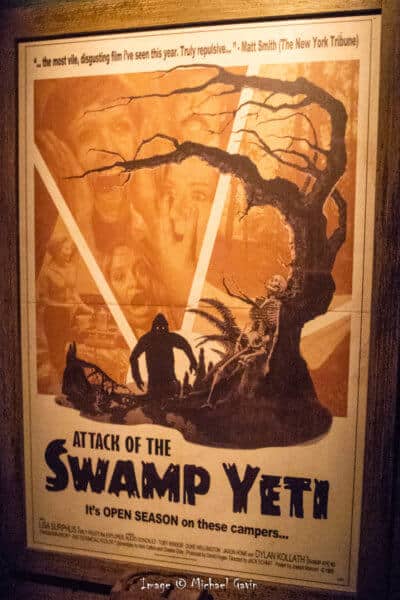 Face fears of “what lies beneath” in this new original themed haunt!
“Depths of Fear mixes all the elements of the unknown with underwater elements, monstrous creatures and a countdown to a disastrous fate.” – Universal Orlando Resort 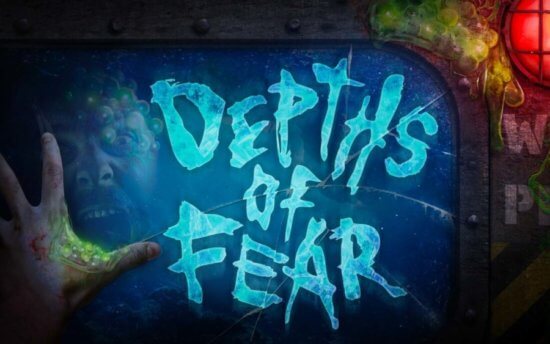 California HHN Guests enjoyed a taste of terror from these icons of horror last year. Now, its Orlando’s turn to escape the very beings responsible for crafting the monster movie genre. This all-new monster of a maze features classic creatures clawing their way through familiar, fear film inspired surroundings.

“Come face-to-face with Dracula in his gothic castle, the Wolfman in a dark Bavarian forest, and the man-made monster within Dr. Frankenstein’s lab. And if you survive them, you still may encounter the vicious Creature of the Black Lagoon, the ancient evil of the Mummy and more.” Halloween Horror Nights

Vampiric nurses first sunk their fangs into Halloween Horror Nights in 2011 (Nightingales: Blood Prey) and returned for an encore during HHN 25 (as part of Jack Presents 25 Years of Monsters and Mayhem – 2015). Drawn to the carnage of war, these creatures feast on Gladiators for their 2019 Horror Nights return. 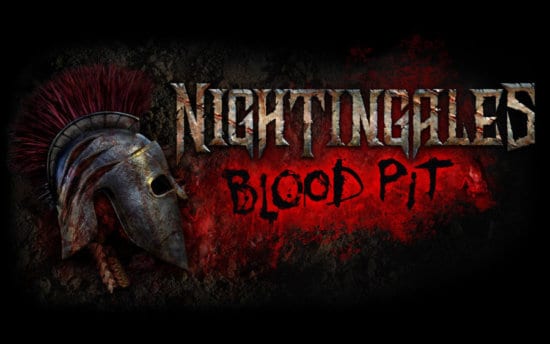 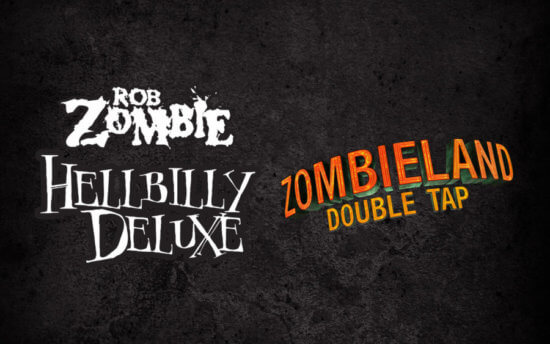 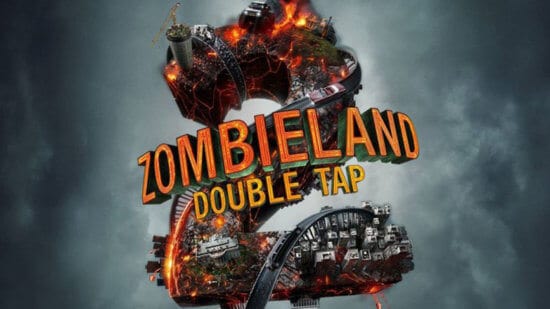 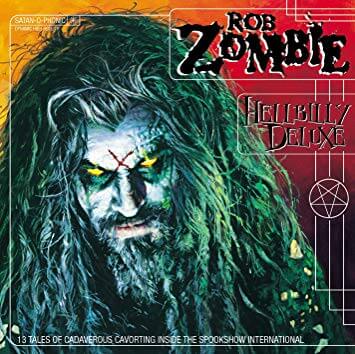 Along with the two IP themed zones, Universal brings a terror trio of home-grown zones:

“Grab a bucket of popcorn and get ready as the lagoon lights up with iconic scenes from Netflix’s Stranger Things, Ghostbusters, Universal Monsters and Killer Klowns from Outer Space. This new show features a blend of fountain-based media, state-of-the-art technologies and special effects in a new way. This is one 80’s nightmare you won’t want to miss.” –HHN Universal Orlando

This fiendishly fun fear show rises from the park lagoon several times a night during HHN hours. Showtimes, per Universal, are 10pm, 11pm and Midnight. 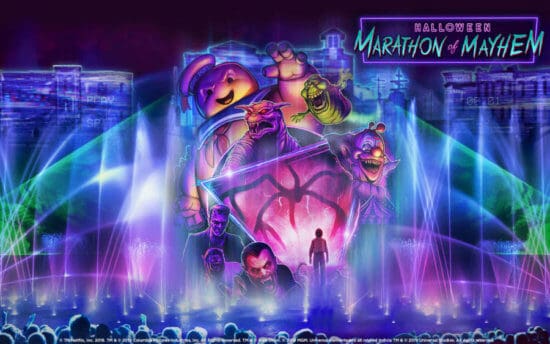 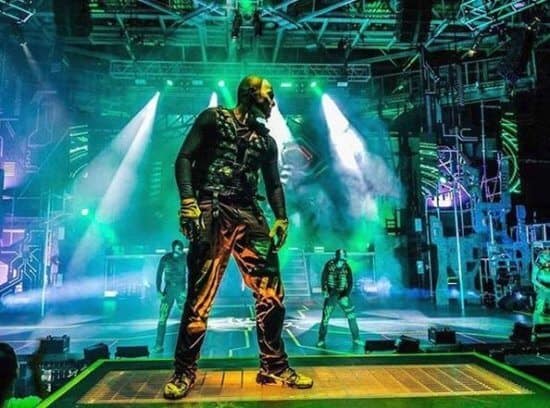 A Friday the 13th to Die For

While Orlando might get the jump on launching Halloween Horror Nights for 2019, Hollywood earns the ultimate date for unleashing horror: Friday the 13th! Universal Studios Hollywood’s HHN event opens on September 13, 2019! Like their Florida counterpart, west coast chills and thrills continue, on select nights, through November 2nd.

So far fear for this year has revealed itself in the form of three haunted houses. “Stranger Things” accompanies the following frights.

Combining elements from the original eighties version with Shudder’s reboot of the fear franchise, Universal Studios Hollywood welcomes “Creepshow” to their 2019 haunt line up!

While Orlando witnessed deranged damage from disjointed horror host H.R. Bloodnguts (2011), Hollywood enjoyed Holidayz in Hell scar zone frights (2018). This year the calendar is once again marked with macabre mayhem for 2019, Holdidayz in Hell returns to Hollywood with its very own morbid maze.

Last year Hollywood hosted Universal Monsters in their very own macabre maze. September 2019 will see a spooky sequel in “Frankenstein vs the Wolfman.” As these two classic monsters stalk each other, HHN guests are caught in the middle. Slash, Guns and Roses guitarist, delivers an encore performance as he returns to score this monster maze.

The Curse of PANDORA’S BOX

The last piece of the puzzle just fell into place for Halloween Horror Nights at Hollywood California houses.  An original nightmare from the creative team at Universal, “The Curse of PANDORA’S BOX” escapes on Friday the 13th of September (opening night)!

California and Florida aren’t the only Universal Studios theme parks determined to strike fear into the hearts and minds of brave visitors. Both Singapore and Japan locations lure victims with their own version of Halloween Horror Nights. Neither location has let its secrets out yet, but both are listed on the Halloween Horror Nights website, with the option to return for future fear finds. 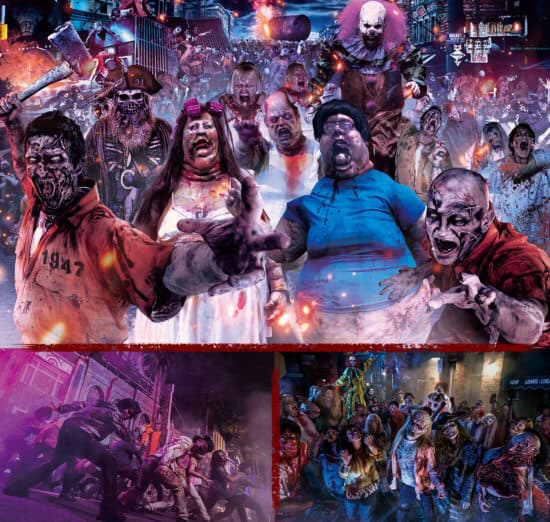 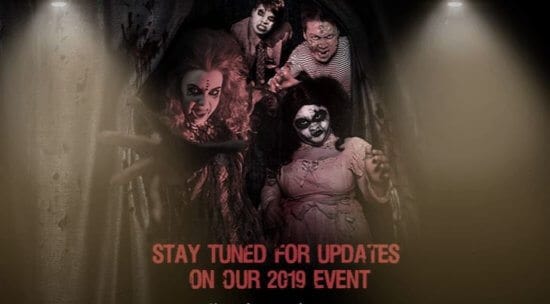 Halloween Horror Nights are already stoking the coals of creepy cool spooky boo fun with what’s been unearthed so far. For an overview of this epic eerie event, check out our guide to HHN as well as Tips, Tricks, and Treats. Of course, stay tuned to Inside the Magic for more monster madness as Halloween draws closer.

HHN Hollywood welcomes guests on Friday the 13th of September.  A special fan preview night on Thursday Sept 12th is also available. The following haunted houses (no scare zones, yet):

Which of these new haunts from Halloween Horror Nights are you most looking forward to?  Please share your anticipated nightmare in the comments below.