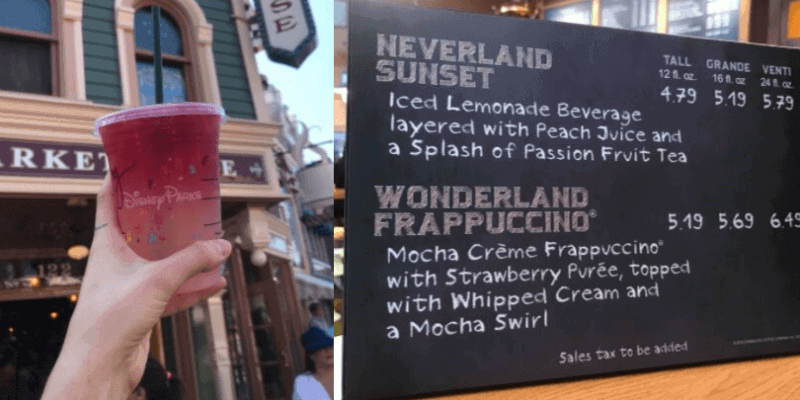 For so many fans, Disney Parks and Starbucks go hand in hand. There’s a Starbucks on Main Street, U.S.A. at Disneyland and Magic Kingdom, several locations at Downtown Disney and Disney Springs, and even Starbucks stores in the rest of the domestic Disney Parks. So when we saw that the Starbucks (called Market House) at Disneyland was selling exclusive new drinks, we knew we had to get our hands on them.

From now through September 30 to coincide with the Main Street Electrical Parade returning to Disneyland, the Starbucks on Main Street, U.S.A. is serving up deliciousness in the form of two new drinks appropriately named after Fantasyland themes.

The Neverland Sunset is the perfect iced tea for a hot day at the parks. It’s an iced lemonade beverage with peach juice and a splash of passion fruit tea. This one is more for those who want a refreshing iced drink rather than a caffeine kick, but it’s so pretty that we couldn’t resist trying it.

If frozen coffee concoctions are more your style, you’ll want to try the Wonderland Frappuccino. This delicious drink is a Mocha Crème Frappuccino with strawberry puree mixed in and topped with whipped cream and mocha swirl. This one is definitely the more decadent of the two drinks, but it’s worth a try if you’re looking for a sugary boost!

While the drinks are only going to be advertised until Main Street Electrical Parade ends its run on September 30, any Starbucks lover will tell you that the drinks are very customizable. This means that we bet you can order the Neverland Sunset or Wonderland Frappuccino (or at least, something very similar) for as long as the Disneyland Starbucks location carries the ingredients. You could even take this recipe and try to order it at your local Starbucks for a little Disney magic added to your everyday!

We’ve seen creative drinks themed to different Disney movies and characters at the Starbucks locations at Disney Springs before, so we’re definitely happy to see this magic come to the west coast. We hope Disney Starbucks keep coming out with awesome magical drinks like these!

Which of these Fantasyland-themed drinks would you rather try: the Peter Pan-inspired Neverland Sunset or the Alice in Wonderland-inspired Wonderland Frappuccino? Let us know in the comments!