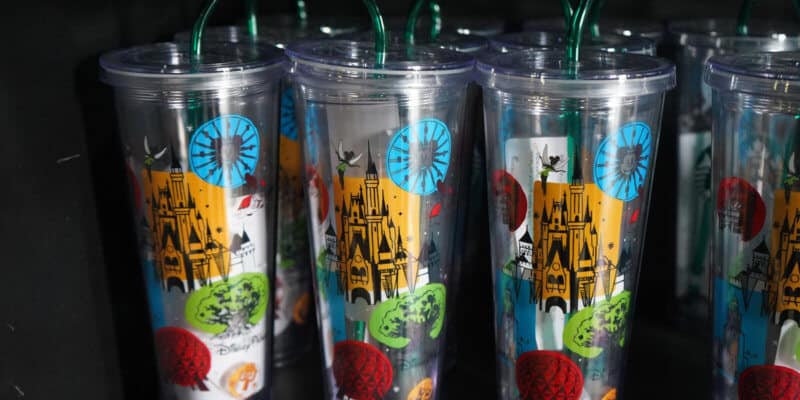 What better way to take the magic of the Disney Parks with you on the go than with these Disney Starbucks tumblers, featuring some of your favorite Walt Disney World attractions.

Spotted at The Trolley Car Cafe Starbucks in Disney’s Hollywood Studios, these tumblers perfectly capture the Disney Parks with their imaginative screen art, which could transport anyone to their favorite Walt Disney World rides wherever they are!

The design of the new tumbler centers around Walt Disney World’s most iconic attraction: Cinderella Castle, which is featured in a print over a yellow background. This is then surrounded by some of the other wonderful attractions found at the different Walt Disney World parks.

Other attractions seen on the tumbler include Spaceship Earth from Epcot and The Twilight Zone Tower of Terror from Disney’s Hollywood Studios, both with eye-catching red backgrounds, The Tree of Life from Disney’s Animal Kingdom with a fitting pop of green behind it, and an image of  “Glockenspiel,” the wacky cuckoo clock with a smiling face from it’s a small world at Magic Kingdom.

In what appears to be a nod to Disneyland, the tumbler also features screen art of what looks like the Pixar Pal-A-Round Ferris wheel adventure attraction at Disney California Adventure with Dumbo flying in the forefront.

Similar to other Disney tumblers found at the Disney Parks, on the opposite side, it features the Starbucks logo.

If you want to score one of these awesome new tumblers, be sure to head over to Walt Disney World today!

Are you going to get yourself one of these tumblers on your next visit to Walt Disney World? Let us know in the comments below!