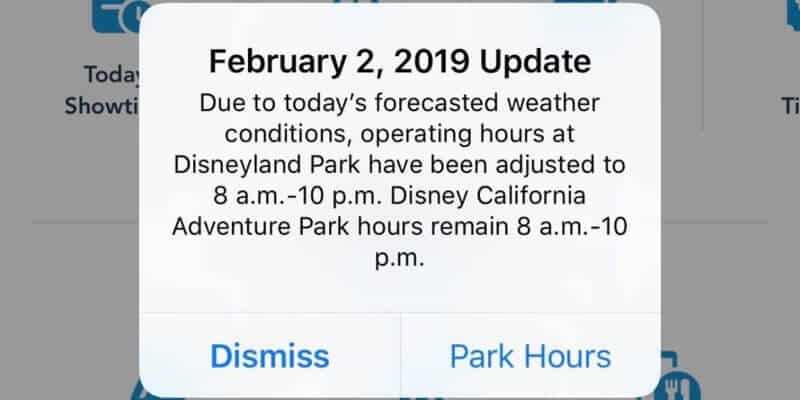 It’s rare for Southern California to get a substantial amount of rain, rarer still that it’s enough to shut down Disneyland. But believe it or not, that happened today.

Announced earlier today on Twitter and the Disneyland mobile app, the operating hours for Disneyland were shortened today due to forecasted weather conditions. The hours were adjusted so that both parks would close at 10 p.m.

The adjustment to Disneyland’s Saturday operating hours came after heavy rain and wind began to impact a majority of Southern California. Mandatory evacuations were issued in areas throughout Southern California, namely those that were already damaged due to the wildfires in 2018 and 2017. Roads have been closed due to flooding, and there have even been several power outages throughout the region.

Still, it is rare for Disneyland Resort to close its theme parks early due to inclement weather. On a typical rainy day at the Southern California Disney theme parks, most attractions will still remain in normal operation, with only a select few not operating due to rain. And usually, Disneyland even advocates for guests to continue to visit the theme parks even in the rain, sharing on the Disneyland Today Twitter account several tips and attractions that you can still enjoy in the rain. Aside from canceled parades like Paint the Night and fireworks shows, Disneyland is still the Happiest Place on Earth, even in the rain.

Disney Parks Blog even shared this video on Friday showing how to enjoy a rainy day at Disney California Adventure:

But this isn’t the first time Disneyland has made a similar decision in which they close the parks early. Back in 2017 just over two years ago, a torrential downpour caused Disneyland to close early, an announcement that was made on one of the theme park’s official Twitter accounts. As we reported two years ago, it is very rare for Disneyland to unexpectedly cease operations. Other days in history when this occurred were the day after the assassination of John F. Kennedy in November 1963, after the Northridge earthquake in January 1994, and September 11, 2001.

Be sure to check the Disneyland mobile app frequently when planning a visit to Disneyland Resort to stay up-to-date on park hours, as they are subject to change.

Have you ever visited the Disney Parks in the rain? Share your experiences with us in the comments!