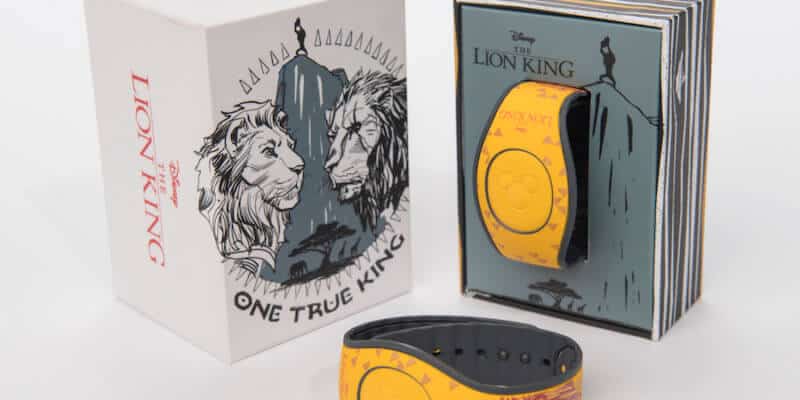 If you’re as excited for the upcoming remake of “The Lion King” hitting theaters this month, you won’t want to miss out on all the amazing new merchandise coming your way. Disney just announced a line of theme park goodies inspired by the upcoming film and the 1990s animated classic, and from MagicBands to magical apparel, there’s something in this collection for every fan.

The all-new Magic Band inspired by “The Lion King” is the perfect souvenir to pick up (and use!) on your next Walt Disney World vacation. This collectible MagicBand comes in a beautifully designed box, and its vibrant yellow color is perfect for summer (and totally reminds us of the opening “Circle of Life” scene from the original animated film). You can purchase it beginning July 19 at Walt Disney World.

We absolutely love seeing all the fun, new Funko Pop! figurines that Disney comes out with, and this set of “The Lion King” characters has us singing all the songs from the movie soundtrack. These Rafiki, Simba, Scar, Pumbaa, and Timon figurines are available for purchase at Disney’s Animal Kingdom merchandise locations.

Alex & Ani bracelets are some of our favorite accessories in and out of the Disney Parks, so we had to share these with you. These two bracelets inspired by “The Lion King” come in silver and gold, and the intricate details make them the perfect arm candy for every Disney fan.

You can never go wrong with a t-shirt themed after your favorite Disney movie. The best part about Disney apparel is there is something for everyone in the whole family, whether you’re young or young at heart. Find these shirts throughout Walt Disney World.

Be on the lookout for these “The Lion King”-inspired items at select merchandise locations at Disney’s Animal Kingdom and throughout Walt Disney World, as well as online. All of the items can be found at Mombasa Marketplace, Island Mercantile, and Discovery Trading Company at Disney’s Animal Kingdom (except for the MagicBand, which will be available beginning July 19, the day “The Lion King” hits theaters).

Which of these awesome items inspired by “The Lion King” will you add to your collection? Let us know in the comments!

Comments Off on “The Lion King” MagicBand, Funko Pop!, Alex & Ani, and other merchandise now at Disney’s Animal Kingdom