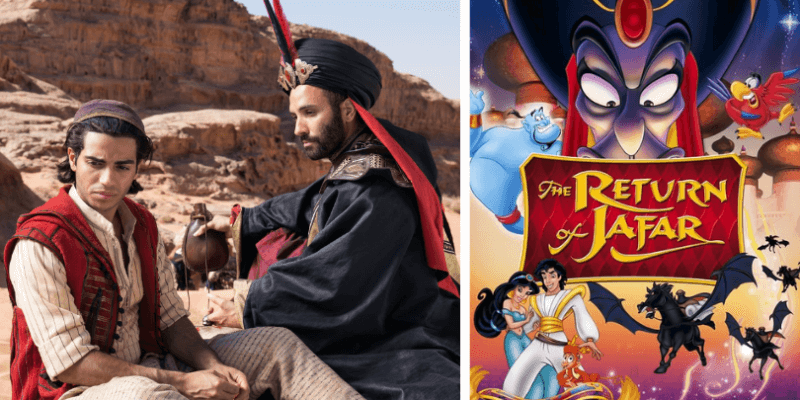 With all of the live-action remakes Disney is developing, it’s no wonder the internet is buzzing with speculation about what could possibly come next. So when we heard that Disney may be making a live-action “Aladdin” sequel that follows “The Return of Jafar,” we knew we had to share the news.

WeGotThisCovered recently shared that following the box office success of the 2019 live-action remake of “Aladdin,” Disney is developing a sequel with a plot that closely follows that of “The Return of Jafar.” We’re not surprised that a sequel to the newly reimagined “Aladdin” may be in the works. The 2019 remake was far from a flop at the worldwide box office, and even though fans were skeptical of how their favorite characters like Genie would translate on camera, many were pleased and even elated with the results of the film. Plus, if the “Aladdin” team wants to continue the franchise in live-action form, they certainly have a lot of options. They could follow the plot of “The Return of Jafar” and even create a third movie after that follows “Aladdin and the King of Thieves.” Or, Disney could take the films in an entirely different direction: instead of creating live-action remakes of the animated films in the “Aladdin” series, Disney could continue the story in a whole new way…and take us to a whole new world, perhaps?

If the live-action “Aladdin” sequel does follow the straight-to-home-video “The Return of Jafar,” this is what you can expect in terms of a plot. Or at least, here’s the official synopsis of the 1994 film below:

In this animated Disney tale, Aladdin, Princess Jasmine and the gang are not as free of the menacing sorcerer Jafar as they think. Since their last encounter with him, Jafar has been imprisoned in a magic lamp, but an inept thief, Abis Mal, is about to change that. Luckily for Aladdin and friends, Jafar’s parrot, Iago, has switched to their side — which is good, because they need all the help they can get.

We aren’t exactly sure what Disney has up their sleeves for a live-action “Aladdin 2,” and we don’t even know which actors or production team members have signed on for the film. But if 2019’s “Aladdin” is any indication of how magical and fun a live-action version of “The Return of Jafar” can be, you can bet we’ll be buying our tickets as soon as we can.

Do you think Disney should keep making live-action remakes of classic animated films? Let us know in the comments!