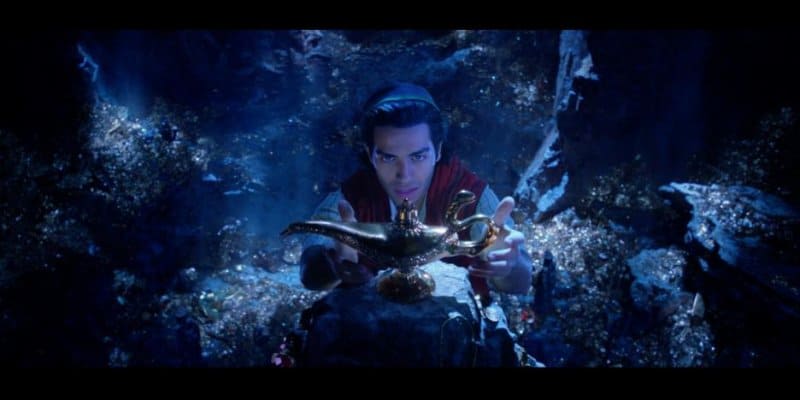 Disney’s live-action “Aladdin” hits theaters this week, and we’ve been itching to see it since before the first teaser trailer dropped. It’s been almost 30 years since Disney released the original “Aladdin” film (27 years, to be exact), and ever since the live-action remake was announced, fans have speculated whether or not a new version could live up to the magic and splendor of the animated classic. Well, Disney fans, we’re happy to report that after seeing the film for ourselves, we think the new “Aladdin” is just as shining, shimmering, splendid as the original…but in a whole new way.

First things first: we’ve got to talk about Genie. When Disney announced that Will Smith would be taking on the role of Genie in the live-action film, the fan response was pretty divisive. While some long-time Smith fans seemed excited to see their favorite actor take on such a magical role, many Disney and “Aladdin” enthusiasts were hesitant to accept anyone new, let alone Smith, in a role that had been so iconic when portrayed by the late Robin Williams. Still, just as Smith shared before the film’s release, the Smith version of Genie gives a nod to Williams but is very much his own new character. And while Smith’s Genie is different, he’s still funny, charming, and all-around enjoyable to watch on screen. It’s hard to think of anyone as Genie other than Robin Williams himself, but Smith did a great job creating a new Genie for us to fall in love with.

While Genie may be the first thing that comes to mind when we think of “Aladdin,” the second has got to be the music. The songs in the 2019 “Aladdin” film may not surpass the original versions, but they sure come close. Jasmine finally gets a solo, and although it may feel a bit unexpected for fans of the original film, we’re happy to see her get her own song showcasing her character development and confidence. Smith puts his own twist on “Friend Like Me,” and “A Whole New World” feels just as magical as the original. Interestingly, one of the best musical numbers from the film was “Prince Ali.” The epic visuals made this scene feel even more grand and spectacular than the original, and it definitely hyped up the audience for what was to come in the rest of the film.

The film breathes new life into the classic characters we know and love just as much as it introduces new characters we never knew we missed. Dalia, Jasmine’s handmaiden, is a great addition to the film and adds some relatable comic relief to several scenes. The animal sidekicks Iago and Abu translate surprisingly well in the live-action adaptation. While it would have been nice to learn more about Jafar’s backstory (and Jasmine’s father, the Sultan, could have had more character depth), given the film’s length, additional song, and necessary scenes, it’s clear the “Aladdin” team did their best to create a complete story that included old characters and fun new ones.

By far the most magical elements of the live-action “Aladdin” film were the costumes and set design. The film is a visual masterpiece from start to finish, with bright colors, epic sets, and immersive scenes that had us wishing Imagineers would create an even better magic carpet attraction in the Disney Parks. How awesome would it be if we could actually fly over Agrabah with a magic carpet and Abu as our guides? Sign us up!

Overall, “Aladdin” is another fun addition to Disney’s lineup of remakes. It’s unclear whether this version will be an instant classic given the timeless reputation of the original, but it’s definitely a must-see for any Disney fan.

What’s your favorite recent remake of classic Disney films? Let us know in the comments!

Comments Off on REVIEW: Disney’s live-action “Aladdin” transports fans to a whole new world of magic