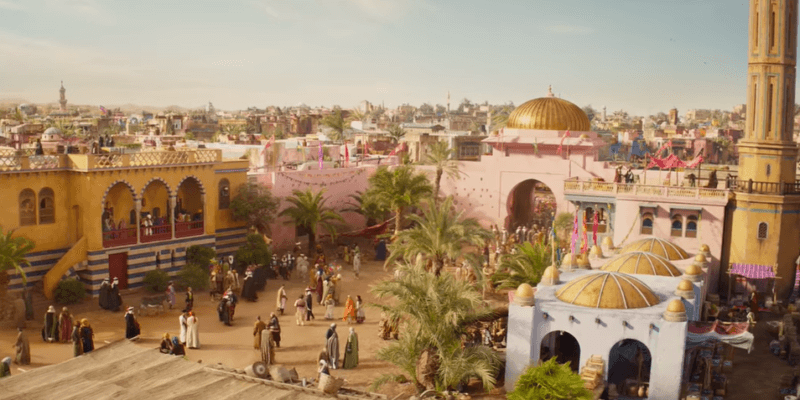 Disney’s recent remakes of classic animated films have sparked a lot of conversation and mixed reactions from old and new fans alike. So when we caught a glimpse of this all-new sneak peek of the live-action “Aladdin” film, we knew we had to share it.

In this new video, the team behind “Aladdin” takes us behind the scenes of the world of Agrabah, the fictional city in the Middle East where the story of “Aladdin” takes place.

“One of the things that I love about ‘Aladdin’ is that it’s a fairy-tale story in another part of the world,” says Mena Massoud, who plays the titular role in the upcoming film.

In the behind-the-scenes featurette video, “Aladdin” producer Dan Lin shares that when making the film, the team wanted to ensure that they were as authentic as possible. The team shot on location in Jordan, which Will Smith, who stars as Genie, says is a place where “you can just feel the history in the sand. I think it adds a level of reality.”

The film’s co-writer and director Guy Ritchie shares in the sneak peek that when making the film, the creators had a team of cultural advisors in order to give the film an authentic voice. Agrabah, as Lun puts it, is heavily influenced by Arabia and other neighboring cultures. The film’s creators and actors share that the entire Agrabah set was magical and they could truly get lost in the streets during production.

“I’m excited to sit in the audience to see it because everyone really doubled and tripled down on getting it right,” Smith says.

Take a look at the video sneak peek of Agrabah in “Aladdin” below:

For those of you who have missed the scoop on “Aladdin,” here’s the official description, courtesy of Disney:

A thrilling and vibrant live-action adaptation of Disney’s animated classic, “Aladdin” is the exciting tale of the charming street rat Aladdin, the courageous and self-determined Princess Jasmine and the Genie who may be the key to their future. Directed by Guy Ritchie, who brings his singular flair for fast-paced, visceral action to the fictitious port city of Agrabah, “Aladdin” is written by John August and Ritchie based on Disney’s “Aladdin.” The film stars Will Smith as the Genie; Mena Massoud as Aladdin; Naomi Scott as Jasmine; Marwan Kenzari as Jafar; Navid Negahban as the Sultan; Nasim Pedrad as Dalia and Billy Magnussen as Prince Anders.

What do you think of the new live-action remake of “Aladdin,” which hits theaters on May 24? Let us know in the comments and share this post with your fellow Disney movie buffs!