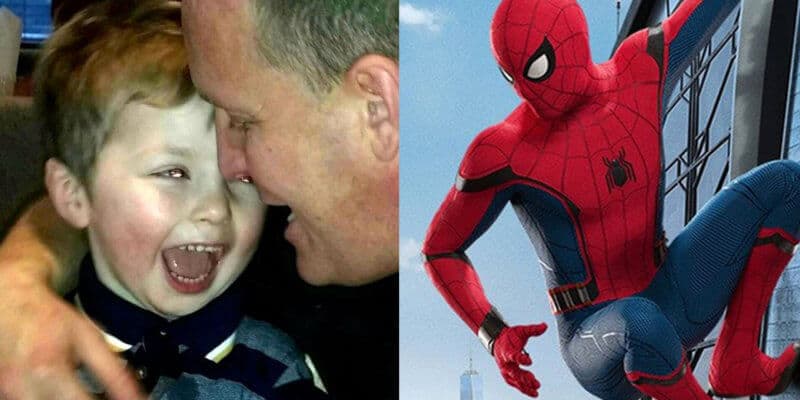 Council bosses told a grieving dad he needs permission from Marvel Studios to get a Spider-Man headstone for his late four-year-old son who died of a genetic disease.

Ollie Jones, 4, died in December after battling leukodystrophy, a rare genetic disease. The boy was buried at Maidstone Cemetery, which is where the boy’s father, Lloyd, would like to mark his grave with a specially designed “Spider-Man” headstone. Although, Maidstone Borough Council has halted the plans as they’ve said they need permission from Marvel, who currently owns the right to the comic book character, to approve it.

Lloyd would like to mark the stone with a “Spider-Man” design as the web-slinging superhero was a favorite of Ollie’s. “At the moment, I go to his grave and see flowers, it would be nice to have something that really reminds me of him,” said Lloyd.

Ollie’s funeral had a visit from Spider-Man and red and blue balloons adorning a horse-drawn carriage. “We can’t move on until we have his headstone done – Spider-Man was Ollie’s entire life. He loved it so much.” continued Lloyd.

Lloyd went on to share that Ollie’s coffin was covered in Spider-Man and the procession was led by someone dressed as Spider-Man and the themed headstone would really mean a lot to him and his family. “I didn’t expect it to be an issue – my funeral director, who’s also my friend, rang me and told me they can’t do it. I thought he was joking at first,” said Lloyd.

“We understand copyright but I don’t see why Marvel would have any issues with this.” Lloyd and his family reports reaching out to the company to get the permission needed. However, they haven’t had any success. “We’ve tried every email address and number we can find but so far we haven’t heard anything back from Marvel,” said Lloyd.

In response to the lack of success Lloyd and his family has had reaching out to Marvel for the proper permissions, a Maidstone Borough Council spokeswoman has said: “Maidstone Borough Council is trying to help a family who have asked whether they can place a Spider-Man headstone at the grave of their young son. Sadly, these types of stones have to adhere to copyright and while we understand this is a very emotional time for the family we have made contact with Marvel to ensure the family are complying with their terms and conditions. The MBC Bereavement Services team will do everything they can to help the family throughout this process.”

Leukodystrophy, which is genetic, effects one in 7,000 people. “It’s a fatal condition. It affects them from the age of about two and then most people with it live to around 20,” said Lloyd to Daily Record. He continued: “It’s not painful, but it disrupts their muscles. You try and put a shirt or their trousers on and there muscles can tense up. In the end, Ollie could only move his hands to play with his toys.”