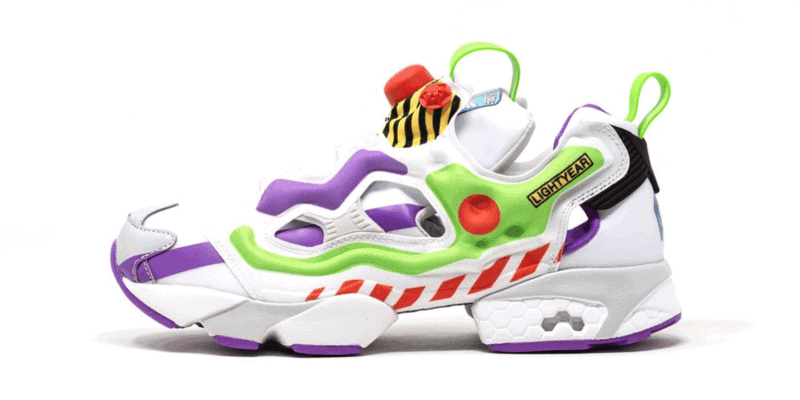 Who doesn’t love Disney/Pixar’s Toy Story films? The movies are full of heartfelt stories following every Disney fan‘s favorite animated toys, and what better way to celebrate these characters than with these epic new kicks by Reebok?

The new shoes are Reebok’s latest iteration of the Instapump Fury model and are designed in the colors of two of the most beloved toys from Andy’s toy box: Buzz Lightyear and Woody. The release comes as a three-way collaboration between Disney/Pixar, Reebok and BAIT.

Each sneaker comes in mismatching colors for each foot. The left side is designed in colors of purple and green, to reference Buzz Lightyear, and the right side features the palettes of yellow, white, blue denim and cowhide, to reference Woody.

The left, featuring Buzz Lightyear’s colors, also features a purple inner collar, which is set against a green heel pull with “SR” stamped below it. Found at the top of the shoe is a red Instapump button surrounded by black and yellow hazard stripes. “LIGHTYEAR” is printed over the green sidewalls and red stripes can be found on the vamp.

The right, featuring Sheriff Woody’s colors, also features a red tongue tab and heel pull, which are detailed with mid-western dragonfly motifs. This is a reference to Woody’s neckerchief.

This BAIT x Disney/Pixar x Reebok Instapump Fury “Toy Story” collaboration arrives in celebration of the premiere of Toy Story 4. For those looking to get your hands on a pair, be sure to act fast! Reportedly, only a handful of pairs will be produced as Reebok is not planning a general release for the shoes. Reebok has not yet announced which retailers will get the new shoes but we will be sure to update this story as information becomes available.

What are your thoughts on these new shoes by Disney/Pixar, Reebok, and BAIT? Let us know in the comments below!