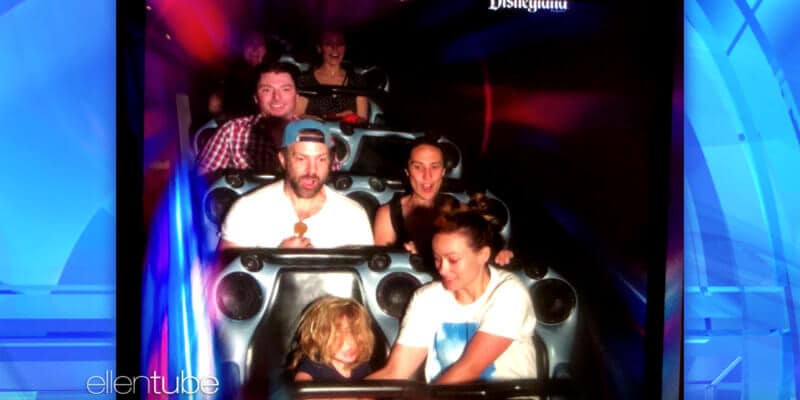 Getting to experience attractions like Space Mountain is a rite of passage for young Disney fans. But what happens when your parents make you go on an attraction that you’re still afraid of? Well, just ask Jason Sudeikis, who called out his fiancé Olivia Wilde for “traumatizing” their young son on Disneyland’s Space Mountain.

In a recent appearance on The Ellen Show, actors and soon-to-be husband and wife Jason Sudeikis and Olivia Wilde chatted about their recent trip to Disneyland. On their day at the Happiest Place on Earth, as Sudeikis remembers it, Wilde took their four-year-old son, Otis, on the ride of a lifetime: perhaps the most intense rollercoaster at the resort, Space Mountain.

Sudeikis, who was the guest host on the episode of The Ellen Show, asked his fiancé, “Now, speaking of our kids, I do want to take this opportunity in front of a bunch of people to ask you, why do you keep traumatizing our son at amusement parks?”

He continued to share that a while back, he and Wilde took their son to Disneyland for his fourth birthday. While Otis loved Splash Mountain so much that they went on it twice, the two parents “got cocky” and decided to try and take him on Space Mountain, which Disney fans know is a fast-moving ride through the darkness of space. And, by the looks of the photo, the ride was pretty intense for then-four-year-old Otis. Thank goodness Disney provides photos of guests during their ride on Space Mountain, because as you can see, Otis has quite the fearful expression while sitting in the front of the coaster, his mother is holding on tight, and his father is looking shocked as ever.

“It’s really traumatizing for me because you’re not supposed to take a 4-year-old on [the ride] — look at my face!” Wilde said. “I’ve never been so scared in my life! That’s real mom fear!”

Rest assured, folks. While Otis was pretty young when he rode Space Mountain, Disney only allows guests 40″ or taller to experience the attraction. Otis looks pretty small, but he would not have been able to board the ride if he wasn’t the proper height.

“First of all, why did we go in the front? That I’ll never understand,” said Wilde. “Second of all, why did they let him on? There’s a height chart, but there’s no weight chart. So he’s really tall, but he’s really skinny, he’s like a little string bean. He could have flown right out of there. I have never been so scared in my life.”

Whether you’re young or young at heart, Space Mountain can be a thrilling rollercoaster for anyone. We just hope little Otis is willing to give it a second chance in the future.

How would you describe your first experience on Space Mountain? Let us know in the comments!