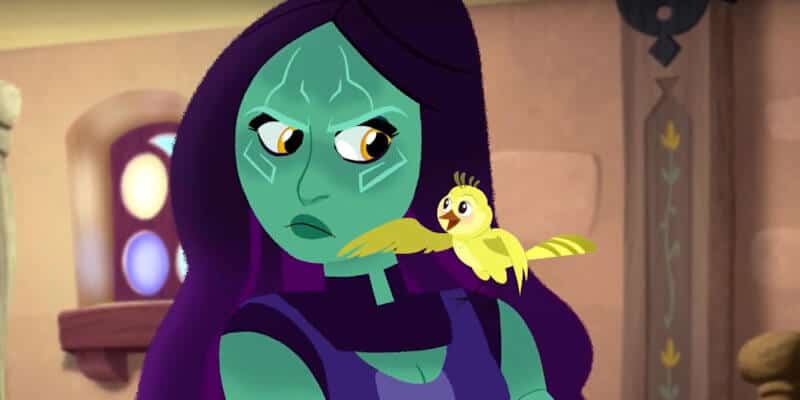 We’ve been waiting for a new leading female to join the lineup of Disney Princesses, but we couldn’t have predicted that a Marvel superhero would fit the role. Gamora from Marvel’s “Guardians of the Galaxy” may have just become a Disney Princess, and we couldn’t be happier with the results.

In a new episode of the hit Disney XD animated series “Guardians of the Galaxy: Mission Breakout!” Gamora becomes separated from the rest of the Guardians and ends up in a Princess Dimension. Here, the wildlife sings, dances, and is much happier than Gamora’s generally cynical and sassy disposition. By the end of the episode, we find out that Gamora’s time in the Princess Dimension doesn’t last long (she encounters some pretty evil critters along the way), but we have to admit that we could definitely watch an entire Gamora-centered Disney Princess movie and be totally entertained.

Take a look at the episode below:

Okay, so Gamora may not be an official Disney princess quite yet, but fans can dream. After watching “Avengers: Endgame” and wondering what would come next for the “Guardians of the Galaxy” leading lady, we can’t get her out of our heads. In the current timeline of the Marvel Cinematic Universe, the Gamora that Peter Quill grew to know and love is dead (thanks a lot, Thanos) and the new Gamora is from a different timeline, running around in a state of the world that’s new to her.

We’re not sure what happened to Gamora and what will become of her relationship with Quill, but we can’t wait to find out. For now, we’ll keep watching episodes of “Guardians of the Galaxy: Mission Breakout!” and daydreaming of a Marvel-Disney Princess crossover to get our Gamora fix.

What do you think of Gamora as a Disney Princess, and what would you like to see become of her in “Guardians of the Galaxy Vol. 3”? Let us know in the comments!

Comments Off on Did Gamora from “Guardians of the Galaxy” just become a Disney Princess?