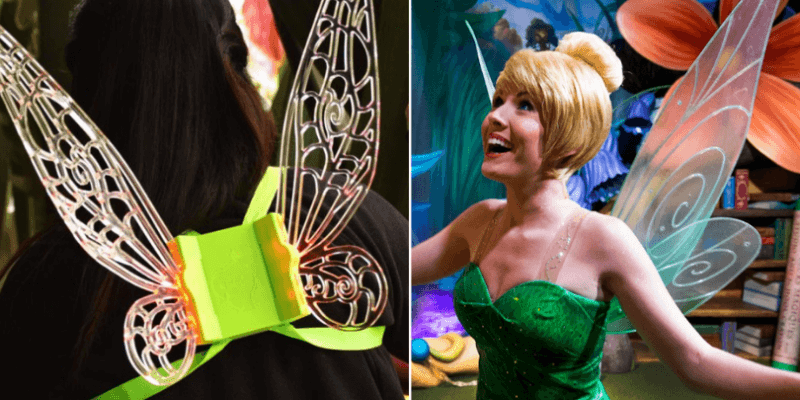 Think you already owned all of the most magical theme park merchandise available? Think again, because your favorite pixie has brought some all-new magic to the Disney Parks in the form of glowing wings for guests of all ages.

That’s right: the latest and most magical merchandise available at Disneyland and Walt Disney World are these adorable new glow wings inspired by none other than Tinker Bell herself. The Tinker Bell glow wings will allow fairy fans of all ages, from kids to adults and everyone in between, to light up the night at their favorite Disney park. They are designed with a similar pattern to Tinker Bell’s wings and have a bright green strap, making them perfect for your favorite Disney Bound or even a costume at Oogie Boogie Bash or Mickey’s Not So Scary Halloween Party. The wings are also battery-powered, meaning they can light up and move with the switch of a button. As Tinker Bell says, how flitter-ific!

What we love most about the new Tinker Bell-themed glow wings is the fact that they were designed for the kid and the kid at heart. These remind us of why Walt Disney created Disney Parks: for kids and adults to be able to have fun together. Having comfortable, wearable Tinker Bell-themed wings like these for adults to wear, too, is just another reminder that we don’t all have to grow up as long as there is magic and fun in the world and at Disney Parks.

What’s your favorite new magical merchandise item available at the Disney Parks? Let us know in the comments!

Comments Off on Adults (and kids!) can now get Tinker Bell-themed glow wings at Disneyland and Walt Disney World