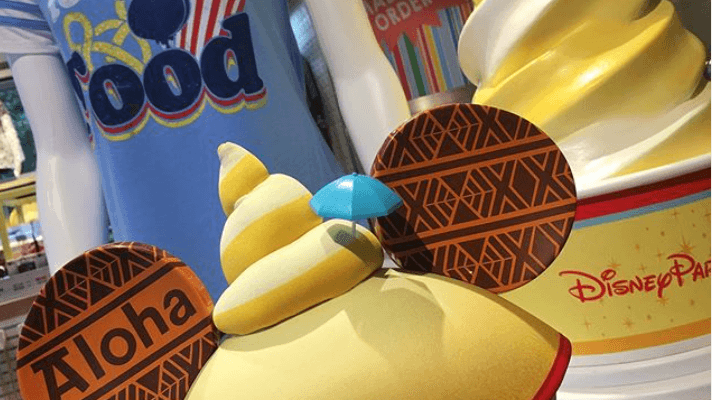 Heads up, snack lovers. It’s time to get your ears on! Disney had just released some adorable new Mickey ears, and we’re craving our favorite Disney snacks just looking at them.

That’s right. The latest and greatest ears to add to your Disney accessories collection are themed after one of the most iconic Disney snacks there is: the Dole Whip.

The latest Dole Whip-inspired accessory takes the form of a classic Mickey ear hat with a modern and adorable twist. It is a bright yellow color as a nod to the iconic Dole Whip soft serve and the center of the hat is topped with what looks like a pineapple-vanilla Dole Whip swirl, one of our favorite treats! We also love the Polynesian-inspired pattern on each ear and the word “Aloha” adorned on one side. But perhaps the best part is the little umbrella topping the Dole Whip swirl at the center, reminiscent of the Disneyland version of the Dole Whip, which comes with a paper umbrella. How cute!

Take a look at the ears in these Disney fans’ Instagram posts below:

If you want to get your hands on these ears, we suggest you keep your eyes peeled in stores throughout Walt Disney World and ask Cast Members when they will be available. So far, these new Dole Whip Mickey ears have been spotted at the Disney Style store in Disney Springs as well as at retail locations inside Disney’s Polynesian Village Resort and Disney’s Hollywood Studios. We’re not sure when these ears will appear in other locations, but by the looks of them, we’re sure they would be a big seller in Adventureland at Disneyland in California and even at Aulani, a Disney Resort & Spa in Hawaii. We’ll keep you updated when we know more about the availability of the Dole Whip Mickey ears, and we’ll update this post when they become available online, as well.

What do you think of the new Dole Whip Mickey ears and other Disney snack trends at Walt Disney World? Let us know in the comments!