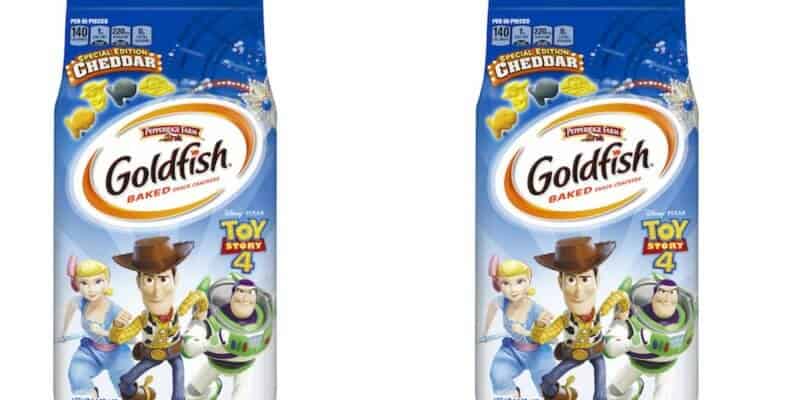 We’re always looking for ways to celebrate our favorite characters and films. So when we heard about these new snacks inspired by one of the most anticipated movies of the summer, we knew we had to share the news. Pepperidge Farm has released all-new Goldfish Crackers inspired by “Toy Story 4,” and they’re almost too cute to eat. Here are all the details.

If you’re as big of a Disney fan as we are, you love themed foods that remind you of the Disney Parks and films. We could hardly contain ourselves when the Mickey Mouse ice cream bars hit local grocery store shelves a few months ago! Well, after the hit Mickey Mouse-shaped Goldfish Crackers, Pepperidge Farm has done it again with “Toy Story 4” snacks, and these have got to be the cutest ones yet. The crackers come in a mix of classic Goldfish shapes and crackers shaped like Buzz Lightyear and Woody, the dynamic duo from the film series, and we wouldn’t have it any other way. These Goldfish Crackers also come in adorable packaging themed much like one of the posters for the upcoming film.

Elite Daily reports that the brand is releasing the special-edition Goldfish Crackers in honor of the upcoming premiere of “Toy Story 4.” They will be available at major retailers nationwide beginning May 1 and will cost approximately $2.49 per bag. We love snacking on Disney-themed food at home, but nothing can stop us from bringing these iconic new Goldfish Crackers with us when we watch “Toy Story 4” in theaters this June. And since they’re going to be available in stores over a month before the film hits theaters, we have plenty of time to get our snacking on in anticipation of one of the films we’re most excited to see this year.

If you haven’t seen the “Toy Story 4” official film trailer yet, you can watch it below:

What’s your favorite Disney-inspired snack? Let us know in the comments!