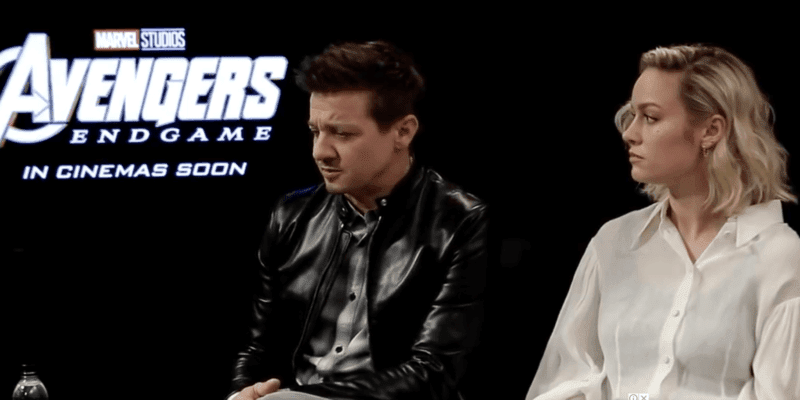 Since before the release of “Captain Marvel” there have been many unconfirmed rumors circulating online that some of the “Avengers” stars haven’t been happy with Brie Larson’s off-screen actions and in a new press interview for “Avengers: Endgame” featuring the Carol Danvers star and Jeremy Renner, a hair-raising situation occurred which seems to possibly support these claims.

According to Daily Wire, many fans pointed out what is being referred to as a “subtle rebuke” by Jeremy Renner pretty shortly after a video interview of the two stars went live online. Many believe the rebuke by Renner against Larson was inspired by what is rumored to be the newcomer Avenger’s quick rise to social activism using her Captain Marvel platform after only completing a few films in the major MCU franchise.

Specifically, the “subtle rebuke” took place after NDTV’s Rohit Khilnani asked the pair what responsibilities come with being a star for Marvel Studios films? Larson replied, “I am committed to self-improvement and I work at being the best person I can be and using this platform for as much good as I can…It doesn’t mean I don’t make mistakes, but I’m very comfortable with that and allowing myself to learn from those mistakes.”

During this response by Larson, some fans reported seeing a change in Renner’s body language. Specifically, he became noticeably unenthusiastic about the interview as if he might’ve been in disagreement with Larson’s response.

This was then followed with Renner’s response to the same question, which seems to subtly contradict a few points from Larson’s response made only seconds before his. “I’m pretty accountable and responsible in my own life at any rate,” he said. “Celebrity isn’t something that I use as any sort of platform to be more responsible or accountable, I suppose. It’s certainly an absolute blessing to see the joy on kids’ faces — I don’t think there is a feeling that comes close to that.”

Now, of course, this response by Renner could have been a complete coincidence and not in malicious intent against Larson at all. Renner could have just been in a more irritable state after completing an endless amount of interviews for the promotion of the film. However, it is interesting that Renner would have such a quick response that is so opposite from his castmate, who at the time, was sitting right next to him.

What are your thoughts of this “subtle rebuke” of Renner in response to Larson? Let us know in the comments below!