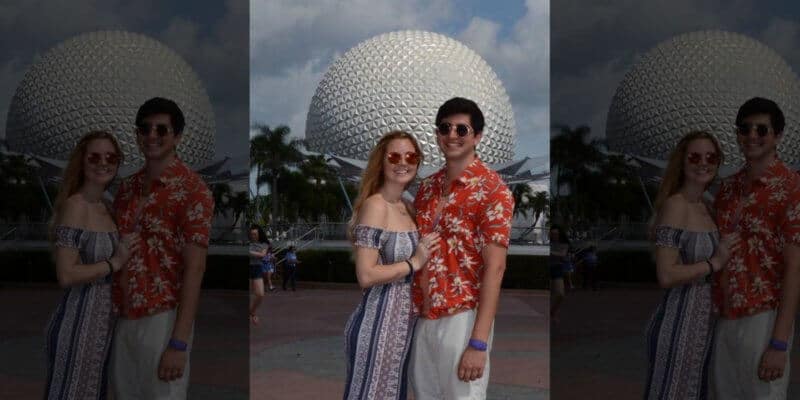 One couple’s magical day at Epcot turned into a game of “hide-and-seek” for the internet after a young woman lost her boyfriend in the major theme park. She attempted to fix the problem through Facebook, but it instead led to the hilarious events of the situation playing out over the internet for all of the Walt Disney World Annual Passholder’s fan pages to see.

Related: Couple Arrested For Having Sex on Ride at Popular Theme Park

According to Fox News, Brittany Blake and her boyfriend Regory Turco had been visiting Epcot on Friday expecting to spend some time together exploring the theme park. However, in a turn of events, Blake ended up spending a good portion of the day searching for Turco.

The separation that rocked the internet first occurred when the two were split up after moving through a massive group of spring breakers. One might say modern technology could be the answer to such circumstances. However, Turco’s phone was dead at the time and he had no other means for communication with Blake or anyone else in their group.

After the separation, Blake spent some time looking independently for her boyfriend only to have little luck due to the fact that the theme park was packed with guests. But after some quick thought and curiosity, Blake turned to Facebook’s group for Walt Disney World Annual Passholders.

In the post, Blake explains the situation and asks if anyone sees him, telling him to meet her and the rest of her group at the Mexico Pavilion.

Related: Couple Has Insane Wedding, Gets Married While Riding Rollercoaster

According to FOX4, the unusual post reached up to 1,300 comments only two hours after going live. And as you might have guessed, a post so peculiar was bound to have some interesting reactions and comments on the social media platform.

“That shirt is very distinctive. Someone should be able to spot him,” Nikki Goodfellow posted with laughing faces following her comment, FOX4 reported.

As comments and reactions to Blake’s post continued, members within the group created hashtags for the search: #FINDREGORY #FINDBRITTANYBF

As comments continued on the post, as one might imagine, hilarity continued to follow. One specific comment, which later was found to reveal the exact location of Turco, really had a lot of members giggling over the lost boy.

“Ok so place your bets here.. is he… Napping on spaceship earth?, Lost in Nemo?, Drunk in Mexico?, With another woman?, With another man?, Counting pastries at Joeffrey’s?, Collecting magnets in the parking lot?, Stuck inside the globe on the lagoon?, On the monorail to MK?, In line for Frozen?, Leading a group of international tourists with a tall flag?, Planning a surprise proposal in mouse gear?”

However, even though members of the group got a kick out of it, they did look out for Turco as he wandered lost throughout the park, which continued on for hours with no luck.

As the park close approached, with only fifteen minutes left in the day, guests and Blake continued the search. Some even reached out to the original post on Facebook to express their concern.

“Following – need to know how it ends! Where does she find him? Does someone else find him first? Tune in for the case of ‘The Lost Boyfriend, Epcot Edition,’ ” Barbara Rush commented.

As only minutes remained in the day, Turco was finally spotted. Where you might ask? The answer has to be one of the funniest parts of the story: the “Frozen” attraction. 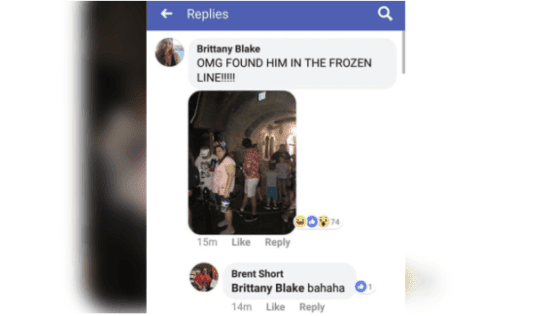 Blake took to Facebook to share the good news. “Update on my boyfriend: Found on the frozen ride. He was drinking all day while looking for me. BTW: thanks for everyone’s nice comments!!” Blake wrote.

As much fun as it was for guests to take part in this modern-day version of “Where’s Waldo: Epcot Edition,” commenters also shared some advice for the couple to keep the two from being caught up in similar situations moving forward. “Head to customer service/to the front of the park. I’m certain he’s there trying to find you as well LOL” Jennifer Cardona said, adding, “We have a home base we go to if we manage to get separated or phones are dead or other variables.”

One piece of advice not listed on the Facebook post would be to always have a charged phone when planning a day at the theme parks. A pocket-sized power bank is also a good backup option as well.

Have you ever been separated from your friends or family while in the Disney Parks? Let us know in the comments below!