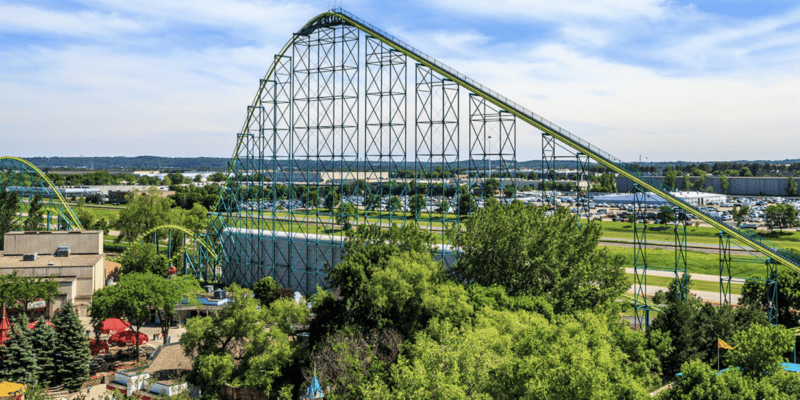 Theme parks are places that create memories that last a lifetime.

No matter what theme park you visit, whether it be a Disney Park at Walt Disney World Resort or Disneyland Resort, or any other destination across the country including places like Universal Orlando Resort, Universal Studios Hollywood, Six Flags, Busch Gardens, SeaWorld, Lost Island or Cedar Fair, you’re sure to have a time you won’t forget.

One couple visiting Valleyfair in Shakopee, Minnesota elected to make the memory of a lifetime by getting married while riding a roller coaster.

The Guest shared a few photos of the wedding on Reddit and explained that the reason they chose the attraction ‘Wild Thing’ had to do with them wanting to face their fears together.

“Wild Thing was my biggest childhood fear,” the groom said. “A few years ago when my wife and I met she forced me to conquer it on one of our first dates. This is the coaster that made me an enthusiast. After riding it I knew I needed to find bigger and better coasters to experience. We now take yearly trips together to parks to ride as much as we can. It all started with Wild Thing.”

You can view more photos at the Reddit thread.

Arguably Valleyfair’s most famous coaster, this green monster will have you going wild. Wild Thing begins by slithering 207 feet up the first hill, giving you stunning views of the entire park. This colossal hill is followed by a gravity-defying drop where the ride reaches up to 74 miles per hour.

This drop then immediately rolls into a second smaller hill, which will have you floating in your seat! Next is the figure eight helix, which soars under support beams for the ride, which seems uncomfortably close, but are in fact out of reach. Views of Route 76 can be seen as you begin to coast and catch your breath, but the funs not over. Wild Thing then concludes with a series of camelback hills running alongside the two first hills.

After a pitch-black tunnel greets you, make sure to smile for the camera! Photos can be viewed after the ride. Wild Thing is located between Funnel Cakes and Prontos. What are you waiting for? Go wild!

One of the most magical places on earth to get married is at Walt Disney World Resort. Guests have seen magical weddings take place at Magic Kingdom and there are packages available for those who want to book a Disney wedding, whether it be in a Disney Park or even at many other destinations across the world.

What do you think of this awesome wedding? Let us know in the comments!

Comments Off on Couple Has Insane Wedding, Gets Married While Riding Rollercoaster