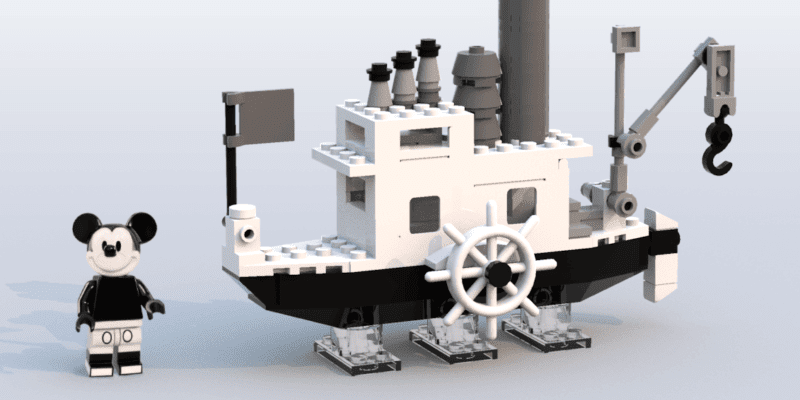 It’s official, the LEGO Ideas second 2018 review round winners have been revealed and a Steamboat Willie design is among two designs chosen to be released as an official LEGO set in 2019.

After the painstaking process of looking over 10 creative ideas from mid-2018, LEGO’s Review Board has finally announced that they will be introducing this new Mickey Mouse Steamboat Willie set this year.

As part of LEGO’s Ideas initiative, the organization allows fans the opportunity to submit their own creations for the chance to be turned into real LEGO sets to be sold in stores. The program allows anyone to submit and if chosen, their concept will be developed in part with LEGO master designers who help bring their concept to the market, while also offering them a share in the profits.

This Disney-inspired design comes from Mate Szabo, who designed the set to celebrate Disney’s original Mickey Mouse from over 90 years ago. Mate, who serves as an animator in his professional life, created the set in a black-and-white design with a model of the Steamboat Willie boat from the iconic 1928 short film “Steamboat Willie.”

In an interview with LEGO, Szabo discussed his inspiration for his design came from other Disney related items from LEGO, saying “when the Disney related minifigure series came out, it immediately popped into my head that it would be cool if there’s a classic looking Mickey Mouse, then I started thinking about which episode I could recreate it based upon, and that was the point when I chose Steamboat Willie. In the wider scale, Disney characters, cartoons, movies always inspire me, and I always like to pay my respect to the brilliant artists who create those masterpieces.

The set is expected to launch in 2019. However, LEGO says they’re still working out the final product design, pricing, and availability, which will all be revealed at a later date.

What are your thoughts on this awesome new Steamboat Willie LEGO set? Let us know in the comments below!