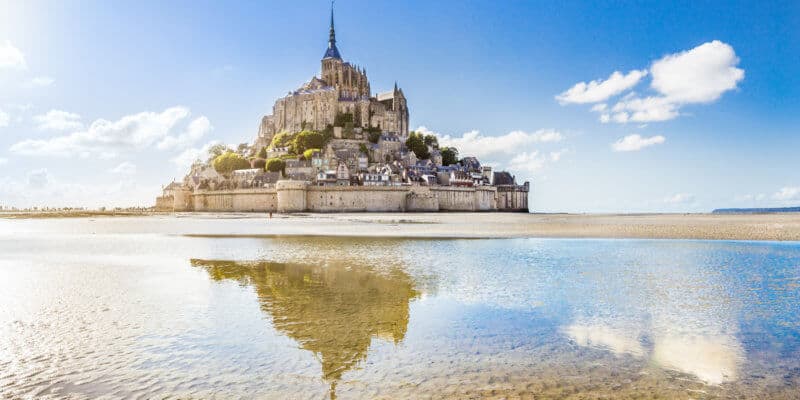 Disney Parks are some of the most magical places on earth, and Disney movies can make audiences feel transported to a whole new world of fantasy and adventure. But have you ever wondered what inspired your favorite attraction or animated film? Many of the attractions and films created by Disney were inspired by real-life places that you can actually travel to. Keep reading to find out some of the travel destinations that inspired your favorite Disney attractions and films.

Perhaps the most recognizable travel destination that influenced Disney attractions is Neuschwanstein Castle, which inspired both Sleeping Beauty Castle in Disneyland and Cinderella Castle in Magic Kingdom. If you’ve ever experienced the Soarin’ Around the World attraction at Epcot or Disney California Adventure, then you recognize this iconic landmark nestled in Bavaria, Germany.

One of our favorite parts of Radiator Springs Racers in Disney California Adventure’s Cars Land is the breathtaking waterfall scene, which was inspired by Havasu Falls in Arizona. This landmark is even more beautiful in person and definitely worth a visit to America’s southwest.

You can actually visit the real-life Matterhorn in the Swiss Alps! This attraction is a Disneyland classic and a must-do for any Disneyland visitor. You probably won’t encounter an abominable snowman on your visit to the real thing, but let us know if you see one!

Imagineers were inspired by villages in Nepal when creating Expedition Everest: Legend of the Forbidden Mountain at Disney’s Animal Kingdom. The architecture and area surrounding the attraction were inspired by the look of this beautiful region in Asia. That must be why this particular area of the theme park feels so immersive!

You don’t have to travel internationally to feel transported back to your favorite theme park. The exterior of the Great Movie Ride (now Mickey & Minnie’s Runaway Railway) at Disney’s Hollywood Studios was modeled after Grauman’s Chinese Theater (now TCL Chinese Theater) in Los Angeles. This is a major tourist destination to Disney and movie fans alike.

We fell in love with the images of Corona from “Tangled,” so when we found out that it was inspired by Mont Saint-Michel in Normandy, we knew we had to add this to our list of places we’ve got to visit. This place looks straight out of a fairy tale, and we’re convinced every lost princess or ruffian has to travel here. Now if only they had some floating lanterns…

Scenes from “The Princess and the Frog”: New Orleans, LA

It’s no secret that “The Princess and the Frog” takes place in New Orleans (there are songs about the city and the bayou in the movie!), so if you’ve never planned a trip to Louisiana before, now might be the time to do so. You can grab some beignets and take a stroll while looking at the colorful architecture that inspired the movie.

Do you remember that iconic scene at the Emperor’s Palace in “Mulan”? Well, you can actually visit the place that inspired the creators of the film! The Forbidden City in Beijing housed dozens of Chinese emperors beginning in the 14th century. The architecture of China is beautiful, so it’s definitely worth a visit to experience some of the historical landmarks that inspired the film.

Carl and Ellie dream of visiting Paradise Falls in “Up,” and you can travel to the waterfalls that inspired the place in the film. Doesn’t this picture remind you of the iconic scene from the movie when Carl, Russell, and Dug finally make it to Paradise Falls? Start your own vacation bucket list and add this location to the top!

The Kingdom of Arendelle from “Frozen” was inspired by the villages and scenery of the Norwegian Fjords. You can travel to these breathtaking destinations that inspired the home of Disney’s snow queen. We recommend going in the summer when there is the most daylight and least snow!

Want to book a trip to see these amazing destinations?

You can visit so many of the places on this list, including Neuschwanstein Castle in Germany and the Fjords in Norway, by booking an Adventures by Disney vacation! Adventures by Disney is a fantastic way to see the world through a magical lens. These trips can take you to destinations like these that inspired so many of your favorite films and theme park attractions. If you’re interested in learning more about Adventures by Disney or you want a no-obligation quote for a vacation, click here to contact an Authorized Disney Vacation Planner at Academy Travel.

Which of these places are you most likely to visit? Comment below to let us know!

Comments Off on Disney-inspired travel destinations: 10 places that influenced your favorite Disney attractions and movies