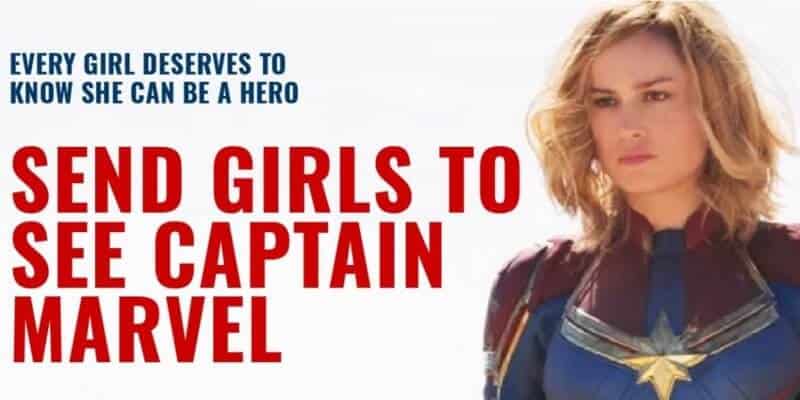 Superheroes aren’t just inspiring to males. Marvel fans finally have a movie with a female as more than just a sidekick. “Captain Marvel” is Marvel Studios’ first film with a female character as the star, and the main character is a powerful, strong woman. And if there was ever a time to advocate for women to go see a Marvel film, it’s now.

We Have Stories and Girls Inc. of Greater Los Angeles have come together to start a campaign called Send Girls to See “Captain Marvel,” which aims to do just that. The campaign is currently raising money to send girls from Girls Inc. of Greater Los Angeles to see “Captain Marvel” in theaters so that these young girls can have a female superhero to look up to just as boys do. This is a fantastic campaign that not only advocates for women and young girls around the world to see the first female-led Marvel film, but also spreads awareness for the two organizations that started the campaign.

Take a look at the information about the campaign:

Everyone should have an opportunity to see women in roles they can aspire to one day be, roles that show women as strong, smart and bold. From a teacher to a fighter pilot—or a superhero. This is an opportunity to continue to empower girls to be just that.

Marvel Studios’ first female led film, “Captain Marvel” offers this type of important representation. We want to help girls from various backgrounds have the opportunity to see the film by providing tickets and renting out theaters.

Why Captain Marvel?
● Captain Marvel is Marvel Studio’s first woman led film
● She will be the most powerful superhero in the Marvel Cinematic Universe
● The story adds new components to open doors for the overall Marvel Cinematic Universe
● Unlike many female characters, her story doesn’t rely on romance and other typical woman character arcs
● There are multiple female characters in the film that enforce diversity of women in race, careers, and talents
● The film is co-directed and scored by women
● The film releases on International Woman’s Day during Women’s History Month

We Have Stories would love your help in providing these young women from Girls Inc. LA with an opportunity to have a film experience with many elements that are female led.

At the time of publishing this article, the campaign has raised approximately $8,000 of the $10,000 goal in the three days that it has been live on GoFundMe. All additional funds raised by the campaign will benefit Girls Inc. of Greater Los Angeles and We Have Stories.

Girls Inc. of Greater Los Angeles provides support and solutions to girls in Title I schools in South Los Angeles, Watts, and Compton. Many of these girls have faced struggles such as family poverty, gang surroundings, and homelessness, but they still experience the same challenges that females face all around the world.

We Have Stories is a non-profit organization that provides financial grants for resources and support to storytellers and content creators from diverse communities to help increase positive representation of these groups in media.

Visit the Send Girls to See “Captain Marvel” GoFundMe campaign to donate and read more information. Visit the official websites for Girls Inc. of Greater Los Angeles and We Have Stories to read more about each organization.