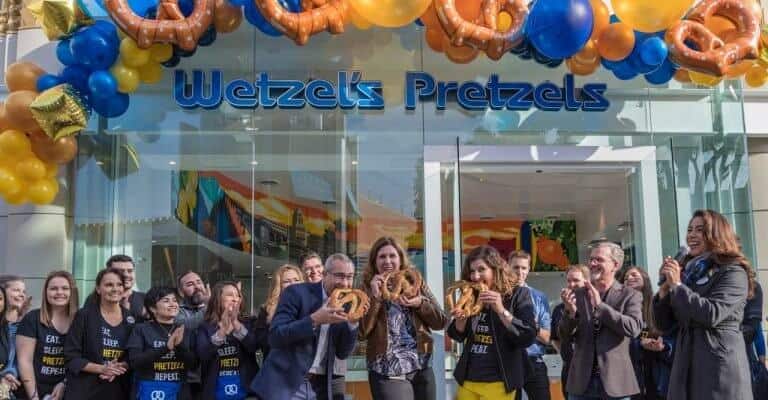 Numerous business at Downtown Disney have reopened after months of renovations — including the World of Disney store, Napolini Pizzeria, and, Disney’s latest announcement, Wetzel’s Pretzels — though hardly are alleviating the emptiness that is Downtown Disney west.

After several months, Wetzel’s Pretzels reopened their flagship store in Downtown Disney on December 18, to many fans’ excitement. The east-end restaurant is known for serving up delicious hot pretzels to parkgoers eager to get a quick bite before heading into the theme parks. We love having quick-service dining readily available in the area, and Wetzel’s Pretzels is right in the middle of all of Downtown Disney’s east-end hustle and bustle. But even though one less empty storefront is great news for the dining and entertainment district on Disneyland Resort property, it still doesn’t change much about the current lackluster state of the opposite end of Downtown Disney, which has remained quiet for months.

Wetzel’s Pretzels reopened after refurbishment not long after another dining location did the same. Also located in Downtown Disney’s east end, Napolini Pizzeria also reopened at Downtown Disney amid continuing speculation of the state of Downtown Disney at Disneyland Resort. The quick-service restaurant is attached to Naples Ristorante e Bar, which has also been undergoing renovations for the past several months in 2018.

Napolini Pizzeria is a favorite among Disneyland Resort guests and local annual passholders looking to grab a quick bite to eat outside the theme parks. The restaurant was closed for renovations for approximately five months this year, and it has now been reimagined with a modern, clean look and a fresh menu. While the previous menu offered pizzas whole and by-the-slice, sandwiches, and salads, there was little that differentiated it from any other quick-service Italian eatery in the Anaheim area. Now, the restaurant’s menu is inspired and innovative, offering create-your-own pizzas, sandwiches, salads, and desserts. Customers can build their own 9″ pizzas or select from Napolini’s signature pizza menu.

With Napolini Pizzeria reopening after five months of renovations and Wetzel’s Pretzels following suit, it’s no wonder Disneyland Resort guests are pleased to hear of the positive changes coming to Downtown Disney. The entertainment and shopping district adjacent to the Disneyland Resort theme parks and hotels has been a destination for tourists and locals alike for years, although it has recently caused controversy among frequenters of the area.

Downtown Disney’s west end, the area of the district closest to the Disneyland Hotel, experienced several store closures after Disney announced their plans to construct a fourth hotel on Disneyland property. Plans for the hotel fell through, and though Earl of Sandwich and Starbucks West (the second Starbucks location at Downtown Disney) recently reopened, the rest of the closed storefronts remain empty. Hundreds of Disneyland Resort fans have expressed their discontentment with the current state of Downtown Disney’s west end, where three large buildings that previously hosted popular destinations (AMC Theaters, Rainforest Café, and ESPN Zone) occupy spaces that could otherwise provide entertainment to visitors.

Though the fate of these spaces on the west end remains to be determined, several businesses on the east end have been renovated and modernized and new restaurants continue to open. World of Disney store was newly reimagined and reopened across from Naples Ristorante e Bar and Napolini Pizzeria. The new Splitsville Luxury Lanes, which offers dining and bowling, opened earlier this year at the former location of House of Blues, and Salt & Straw ice cream opened in October. Additionally, Ballast Point brewery and Black Tap Craft Burgers and Shakes are both coming soon to Downtown Disney’s east end.

Each of these businesses is part of Downtown Disney’s transformation, which will continue to attract more visitors and locals to the area. But while these new businesses are all unique and innovative additions to Downtown Disney, they prompt fans to ask whether Disney plans to expedite the opening (or reopening) of the west end’s businesses, as well, since these updates have yet to be announced for the west end.

With the fresh, modern look and variety of entertainment and dining to choose from at Downtown Disney’s east end, we hope that Disney will soon announce plans for similar cutting-edge businesses to come to the west end soon.

What are your thoughts on the reopening of Napolini Pizzeria and Wetzel’s Pretzels at Downtown Disney, despite other storefronts remaining empty? Let us know in the comments!