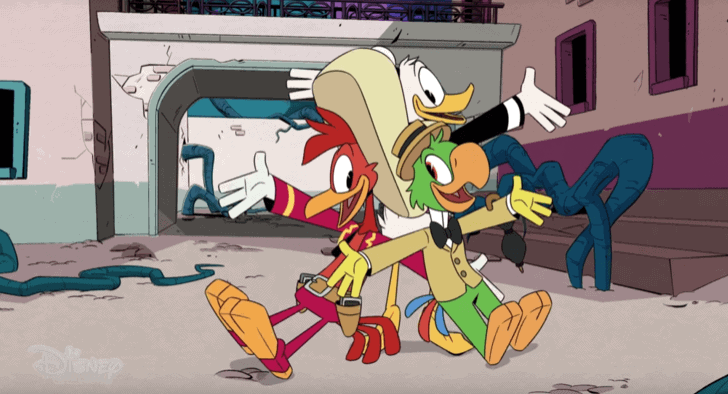 Your favorite band of birds is back and better than ever in a long-overdue reunion. That’s right, the Three Caballeros (the timeless performing trio of Donald Duck and his Latin American pals, José de Carioca and Panchito Pistoles) will appear in an episode of Disney’s “DuckTales” on November 10 on Disney Channel.

In the upcoming episode, the family of ducks (including Donald, his triplet nephews Huey, Dewey, and Louie, Scrooge McDuck, and Webby) will travel to Brazil where Donald encounters his old bandmates Panchito and José de Carioca. Panchito and José will be voiced by Arturo del Puerto and Bernardo de Paula, respectively.

We aren’t sure exactly what adventures and mischief the trio will get up to, but we’re so excited to find out. Check out the teaser for the upcoming episode here:

“DuckTales” also stars David Tennant as Scrooge McDuck, Bobby Moynihan as Louie, Ben Schwartz as Dewey, Danny Pudi as Huey, Kate Micucci as Webby Vanderquack, Beck Bennett as Launchpad McQuack, Toks Olagundoye as Mrs. Beakley, and Tony Anselmo as the legendary Donald Duck. The show, a reboot of the 1987 series of the same name, originally premiered on DisneyXD in 2017 before moving to Disney Channel, where it proved to be a hit with critics and audiences alike.

Fans of the Three Caballeros can also get excited to see the birds at Disney Parks this upcoming holiday season. Disneyland Resort will once again welcome José de Carioca and Panchito Pistoles for their annual holiday cultural celebration ¡Viva Navidad!. At Disney California Adventure, ¡Viva Navidad! returns to bring guests a cultural celebration of the holiday season at Paradise Gardens. The ¡Viva Navidad! Street Party features the Three Caballeros, including Donald Duck, Panchito from Mexico, and Jose Carioca from Brazil, who invite guests to join in their fiesta, complete with live mariachi and samba musicians and folklorico dancers.

Take a look at the Three Caballeros in the 2017 ¡Viva Navidad! performances.

Don’t miss the Three Caballeros on “DuckTales” on November 10 on Disney Channel.