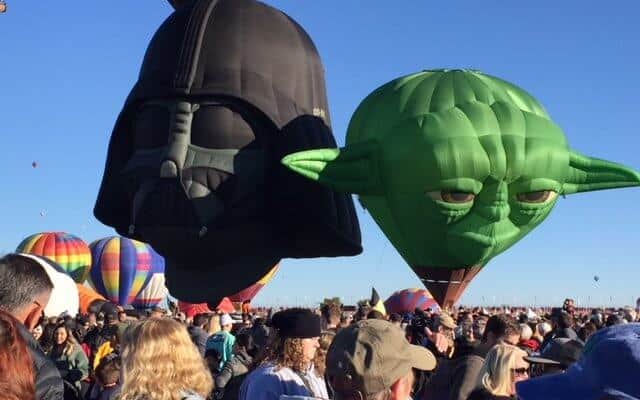 As the cool crispness of fall fills the air, the sky above Albuquerque, New Mexico, is invaded not by the Death Star but by the aviation marvel of hot air balloons on a mass scale. Held each year during the first week of October, the Albuquerque International Balloon Fiesta is a true sight to behold. For nine straight days, you can enjoy the kaleidoscope of colors in the sky – weather permitting, of course! This year’s theme of “Carry Me Away” marks the 47th anniversary of the event.

Two crowd favorites come not from a galaxy far, far, away but from Court-Saint-Etienne, Belgium. Pilot Benoit Lambert has been flying the infamous Darth Vader Balloon since 2007. The Master Yoda Balloon flown by pilot Michel Lambert premiered at the 2014 Albuquerque International Balloon Fiesta balance to the sky.

‘Star Wars’ Director: Darth Vader “Has More in Common With a Car Than a Human”

Along with the mass ascension, the event also has a number of unique events to enjoy. Some Guest favorites include a Special Shape Rodeo, evening Balloon Glows, and AfterGlow Fireworks Show. 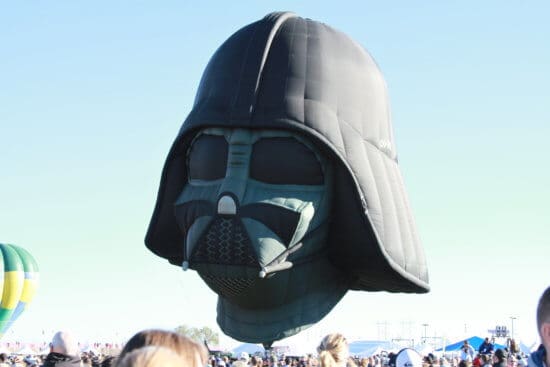 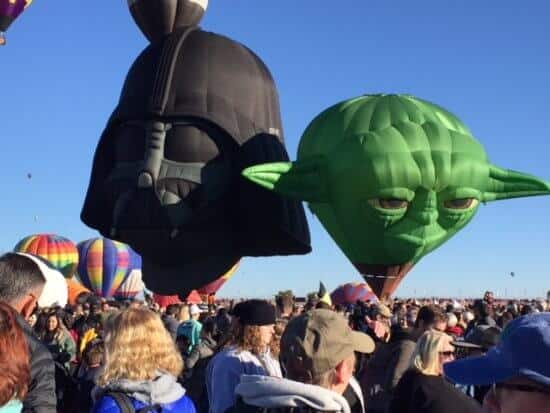 To remember the magic of this spectacular event, it is estimated that more than 25 million photographs have been taken of Albuquerque International Balloon Fiesta. This has repeatedly earned it the title “The World’s Most Photographed Event.” Albuquerque International Balloon Fiesta is, without a doubt, an item everyone should be adding to their bucket list. As hundreds of balloons of all shapes and sizes fill the skies, everyone will be in awe of the pure magic of the event. With 14 different sessions (9-morning sessions and five evening sessions), there are plenty of opportunities to capture that perfect photo as you walk amongst the balloons and watch as they lift off.

For more information, head over to the event website.