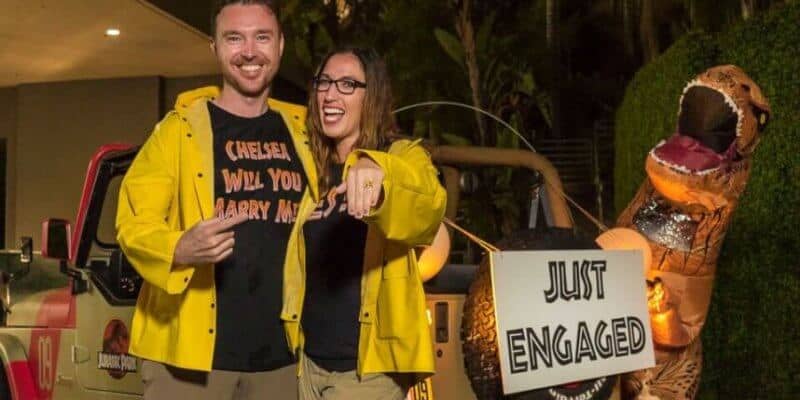 Love, uh… finds a way. Ok that’s not an exact quote but it’s a good way to summarize a new video shared by Universal Studios Hollywood in which an adorable couple not only breaks the record for most rides on Jurassic Park – The Ride, but also celebrates their love by getting engaged.

Chelsea and Devin, two Los Angeles residents who have made a tradition of coming to Universal Studios Hollywood every year for Chelsea’s birthday, visited the park with the goal of breaking the record for most times riding the classic attraction in one day. Of course, Devin also had another goal in mind.

The previous unofficial record was 60 rides. Devin and Chelsea managed to experience Jurassic Park – The Ride 62 times in 13 hours, with just enough break time for a quick lunch and few trips to the bathroom. 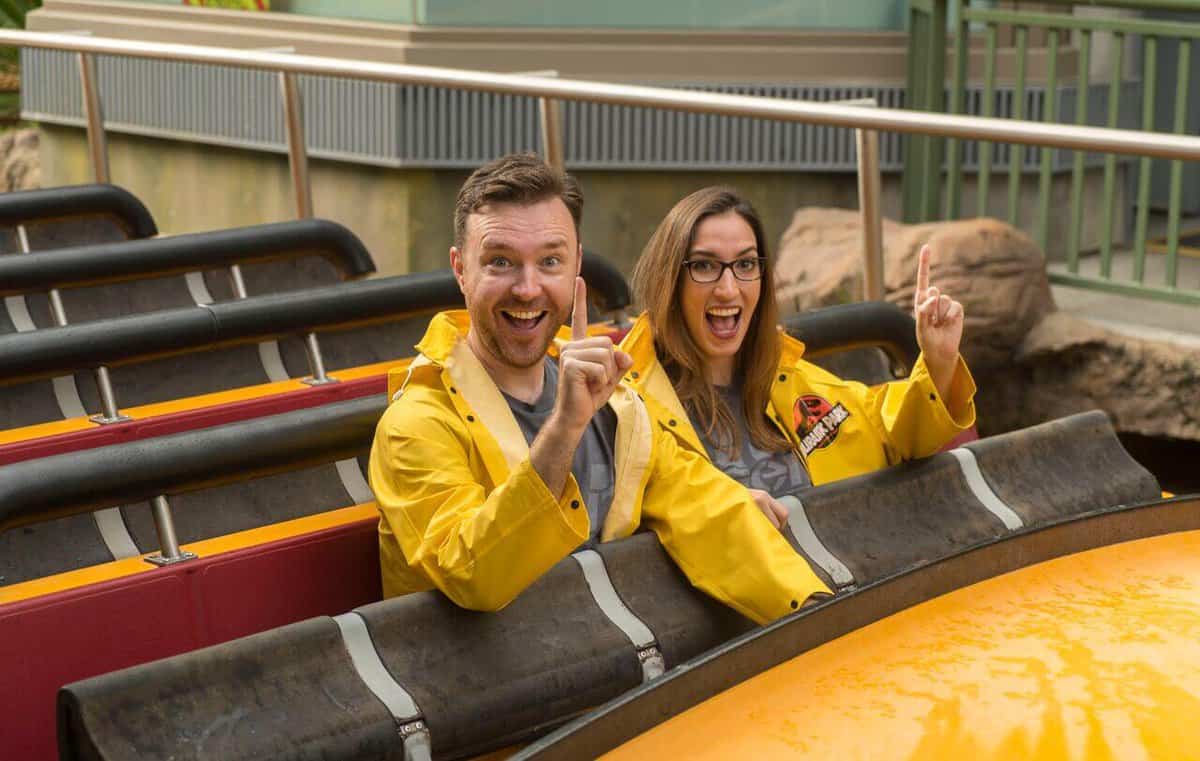 After their 61st ride, the couple examined their on-ride photo, in which Devin had unbuttoned his classic yellow Jurassic Park rain jacket to reveal a T-shirt that read “CHELSEA WILL YOU MARRY ME?” in that classic Jurassic Park font. 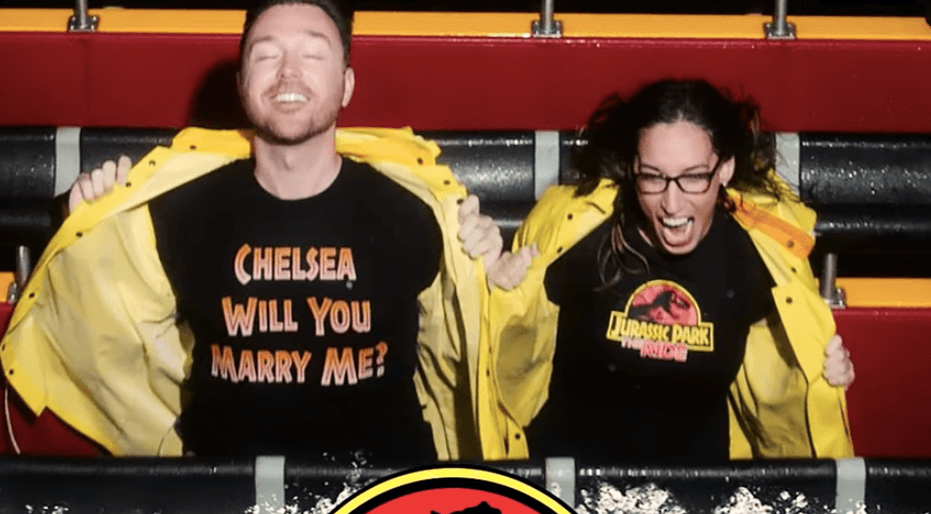 And just like that, two incredible achievements were accomplished. The couple broke the record for times ridden and became engaged to be married. They even celebrated their engagement by riding a 62nd time.

When it comes to the ring, Devin spared no expense. He got down on one knee to reveal, not your traditional ring box, but rather the familiar Barbasol can from Jurassic Park. He opened it up, just like in the movie, to reveal a custom made mosquito amber ring, inspired by the amber rocks from the movie. 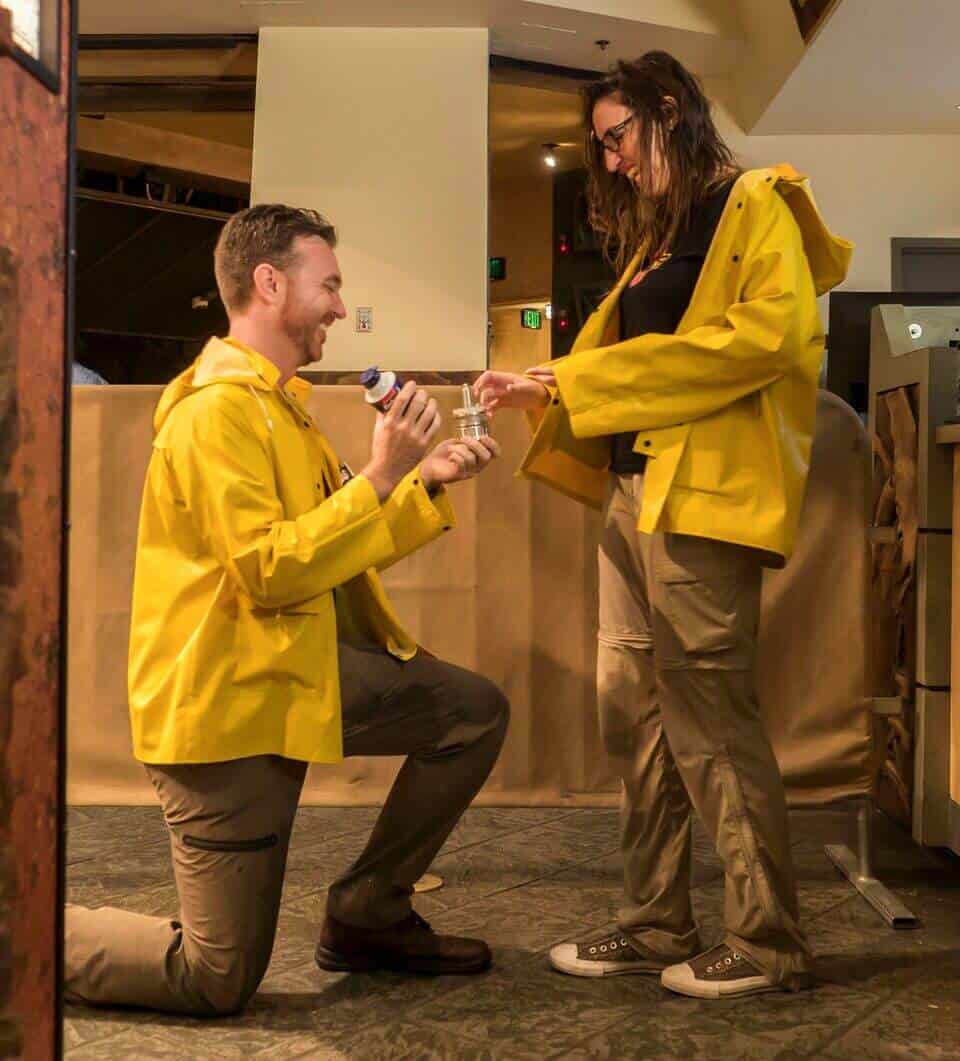 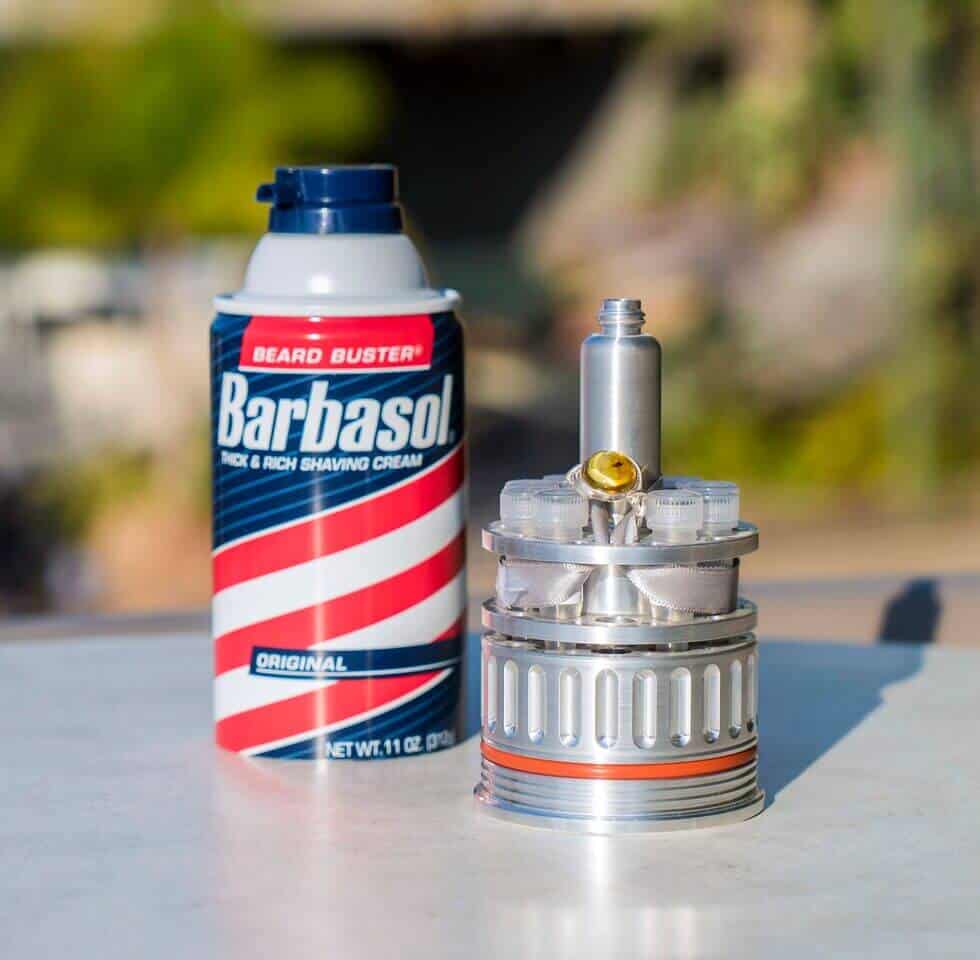 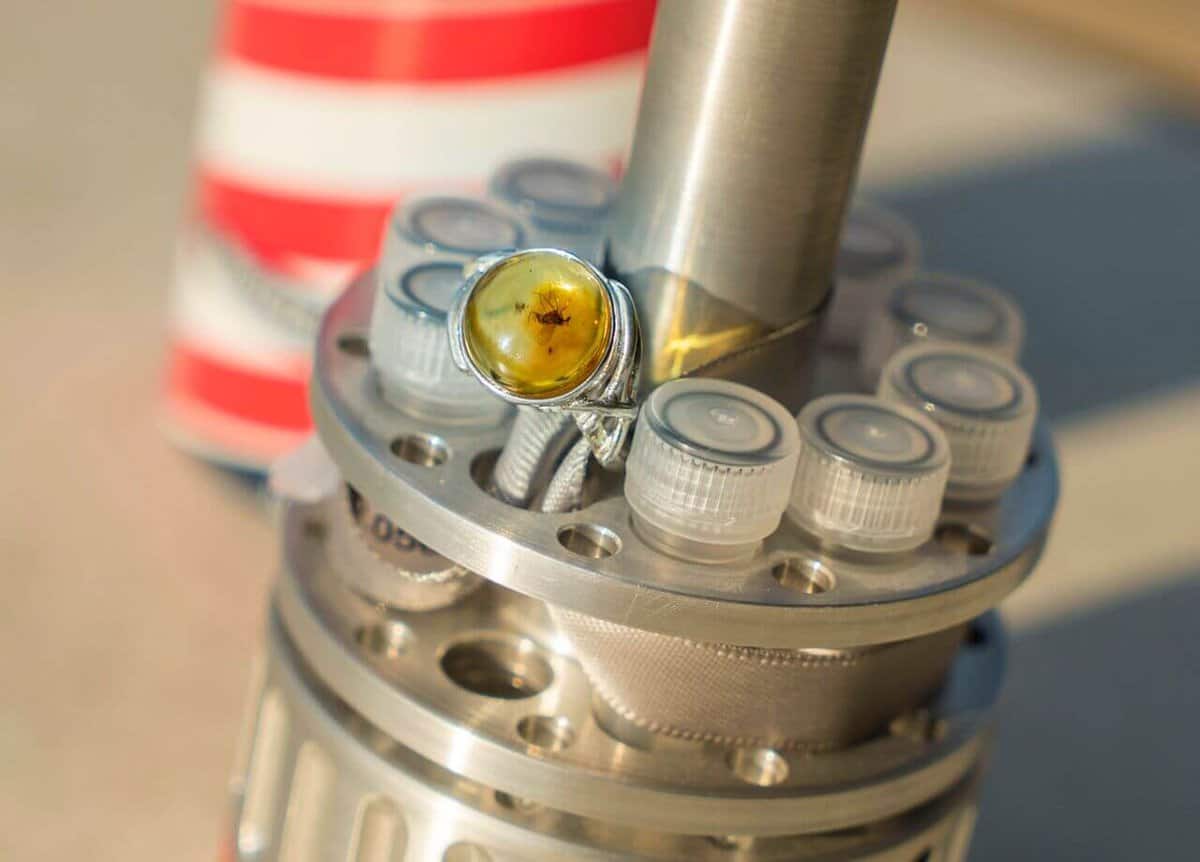 Devin and Chelsea followed up their final ride with some celebratory pictures in the iconic Jurassic Park jeep with a prehistoric party crasher. 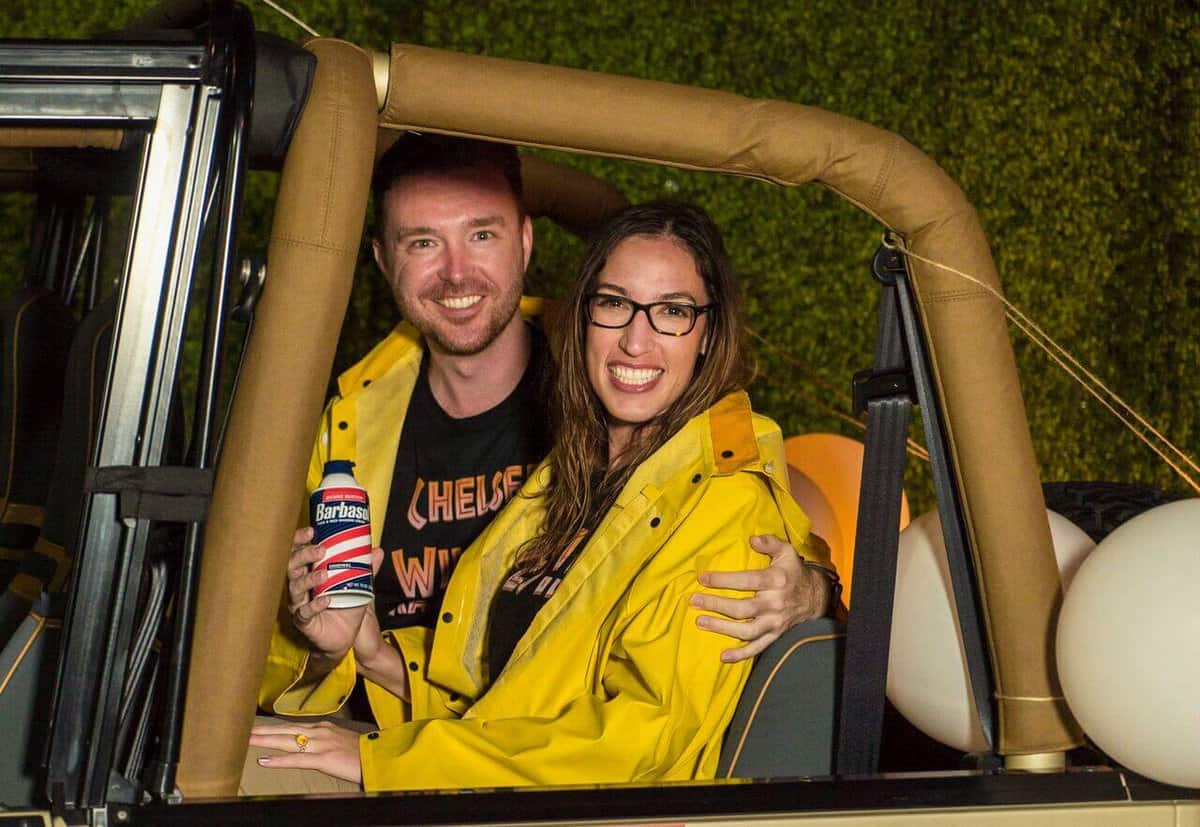 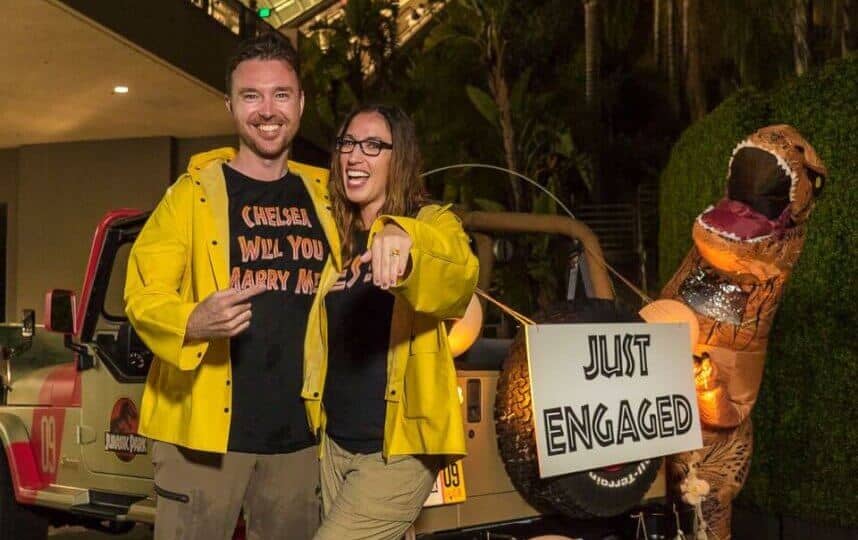 The couple was inspired to break the record when they heard Jurassic Park – The Ride would be closing on September 3 to make way for the new Jurassic World ride coming in 2019.

Do you think you could ride Jurassic Park – The Ride 62 times in one day? Let us know in the comments below!

Comments Off on VIDEO: Surprise proposal caps off couple’s record-breaking ride on Jurassic Park – The Ride at Universal Studios Hollywood