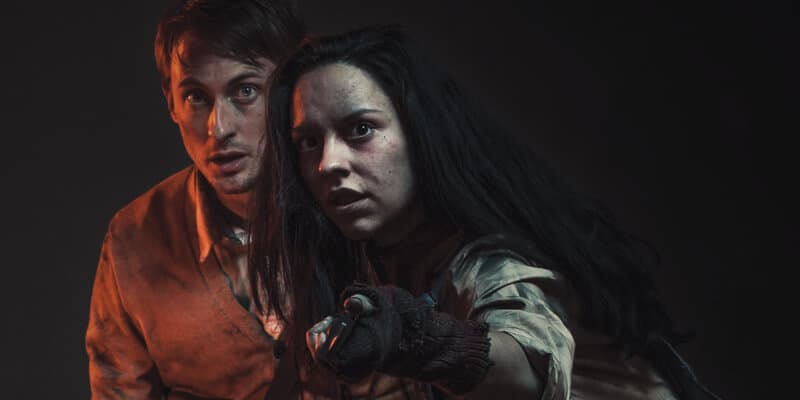 We’ve said it time and again here at Inside the Magic, but it bears repeating: there’s no better option for Halloween-time Immersive Theater experiences in Los Angeles than “Delusion.” And now, not only is the live-only “Delusion” show returning this fall with the all-new story “The Blue Blade,” but the fan-favorite 2014 story “Delusion: Lies Within” is returning in a different format: virtual reality.

At last month’s Midsummer Scream Halloween and Horror Convention in Long Beach, I had the wonderful opportunity to sit down with “Delusion” creator Jon Braver to talk about “Delusion: Lies Within” in VR (after having the chance to experience it for myself), how and why the show got adapted to a new medium, and what “Delusion” regulars can expect from “The Blue Blade” when it premieres in September.

Mike Celestino, Inside the Magic:  I did “Delusion: Lies Within” back in 2014 based on the recommendation of ITM founder Ricky Brigante. It’s so great to be able to relive that show, which was amazing. But what I’m curious about is what you intend for those who haven’t gone through the original play to get out of the virtual reality experience?

Jon Braver:  Ideally, I want them to feel as if they’ve torn the movie screen open and they’ve stepped into a film, and are living inside of it, [looking] right over the shoulder of all the characters. It’s not an interactive piece, like the theater show. Everything with “Delusion” comes down to the story, so it’s just ‘What’s the best way to tell the story?’

This story now exists in two different mediums, and each have their beauty. The live show [has] its intimacy and its tangible [nature], the connection with other strangers. [In virtual reality], you get to fully feel like you’re in a film– full sound design, everything I wanted you to hear and see in the live show, you can see it in VR now.

To me it’s almost as exciting, because you can go back and rewatch it multiple times if you want to, but it’s just you. You’re the only person in this manor with these characters. You’re getting the full score, 360 audio. You’re getting the full creature effects that I want you to see, now with VFX and all that kind of stuff. So one doesn’t compete against the other. If you haven’t gone to the show, you’re now watching a really cool, mysterious film. 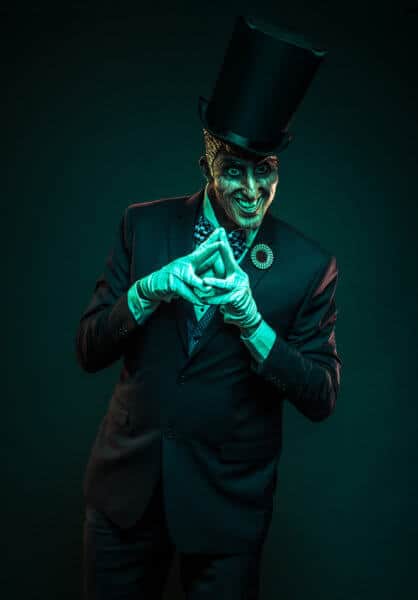 ITM:  When I first heard that you were doing “Lies Within” as a VR experience, I think I expected you to have the camera be the first-person perspective of the characters exploring the mansion. What made you decide to pull the camera back and have it represent a third-person view of the action?

Braver:  I really wanted to treat this as a movie that you’re watching. I think the first-person perspective was going to get a little bit wonky when it [came] to the camera movements I wanted to do. I really wanted it to be cinematic in its camera pushes. [With] a first-person perspective [using] the techonlogy we have, you’re not able to respond, so it would be as if the character is now speaking to you, but it’s a one-way dialogue. I [also] really wanted to showcase the quality of actors that we have.

So I think pulling the camera back a bit– I don’t like saying that so much, because it feels like you’re away from the action; you’re really in the action– but I just felt it really came down to ‘What’s the best way to tell this story? Let’s replace the audience with two new characters: Daniel and Virginia, and have you feel as though you’re going on the journey with them.’ I think that’s what I’ve been getting out of people is that you really do feel like you’re on the journey with them– which you are, you’re rooting for them. I think the intimacy and the connection to the characters is even stronger now that we have these two new characters. It’s being inside a film, that’s what it is. 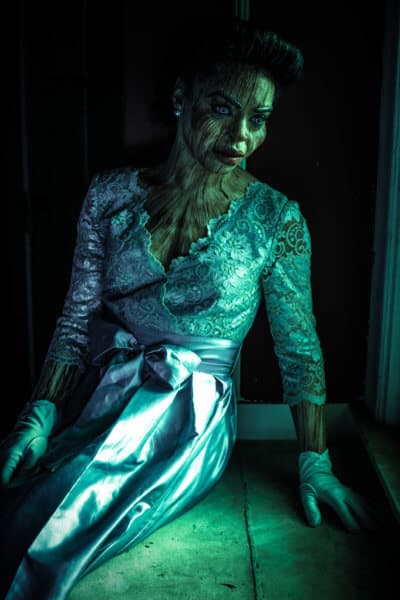 ITM:  I was so glad to see some of my favorite moments from the original show recreated, especially hiding under the table in the dining room. How did you decide which moments to keep intact, and which to change in order to better fit the adaptation to VR?

Braver:  Actually, there weren’t really many moments that were changed at all. They were just made better. Everything you did in the live show, you did here. Originally, this was going to be a ‘Choose Your Own Adventure’ series, where there were two moments where you could choose to follow these characters or [those] characters.

But then we started getting some feedback from Google and other companies. They were like, ‘We love this, but is there any way to just make it more of a traditional film, and have intercuts between the two sequences?’ When we started cutting that together, it worked really well. So in this series, you will get everything you got and more, because people miss certain experiences in the live show. You went [down] a branching path this way, and you missed the other thing. 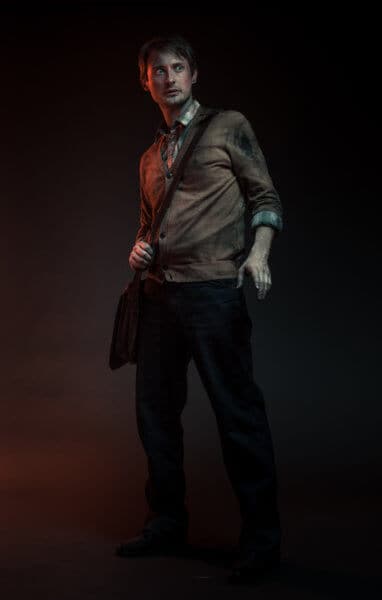 ITM:  Right. In the live show I missed the creature coming out of the fireplace because I was in the wall behind that area while that was happening. So it was great to be able to see that from the other perspective.

Braver:  Oh yeah, that one’s awesome. People love that one. That’s a badass one, especially with the VFX now we can add to it, like the little fire coming off the shoulders, and the embers. It’s awesome.

ITM:  I want to get into how something like this is edited. Another assumption I made when I first heard about this is I figured it would all be one long take. Instead it’s edited more traditionally, like a movie, as you’ve said. I noticed a couple cuts that match on action and specific points of interest. Characters go through a door and it cuts to another door in the same spot, from which they emerge. Can you talk about how you direct the viewer’s eye on where to be looking at certain times?

Braver:  That was crazy. [We] put so much thought into that. How do you direct people in a free-roaming 360 experience? You direct it by blocking with action and sound design. When we’re editing the series, we’re watching it flat on a screen. And then we have the Oculus that we can put on occasionally to see where we’re at.

Now, if you have an actor that’s running towards a door, [on] the next cut we want to rotate the video so that the next main action occurs in the same place as that door. Your eyes are most likely going to be there. You know, we’re rolling the dice. We hope people will follow it. Most people do. A vast majority of people will follow the action. So matching up action in the cuts, mixed with sound design, was the way to do it. 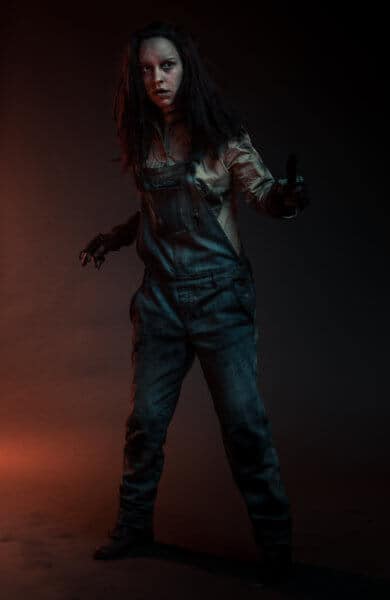 Braver:  There were other good choices as well, too. I think it was my co-producer Dave who brought this to my attention. He was like, ‘What about this one?’ We started talking it through and we thought of the idea that this is all about a novelist. So you’ve got this book that’s open in front of you. We would imagine this floating book, and then the chapters would appear. And then you’d see an illustration of the beginning of the chapter, and that illustration matches the first frame of the video you would be in. And [we’d] just imagine diving into the illustration, going through the book.

So it was that image that got me to think, ‘How cool would it be to be inside of the story?’ It was all about that. Every one of them is sort of ‘You’re inside the story,’ but this one is like, physically you’re in it. So that’s where it started. And it also started from the idea that I saw so much VR [and] I didn’t like it.

I’m a VR skeptic. I’m really not a fan of it. I wasn’t a fan of it. And the more I saw, the less I became a fan of it, but the more I started having the idea that, ‘Well let’s do this, but let’s do it in the most cinematic way we can possibly do it, with the best cameras. Let’s go big with it and make it look like the best there is.’ So we did our best. I think it looks great, and that story lends itself really well, in the fantastical aspect of it, to being immersed in the novel itself. 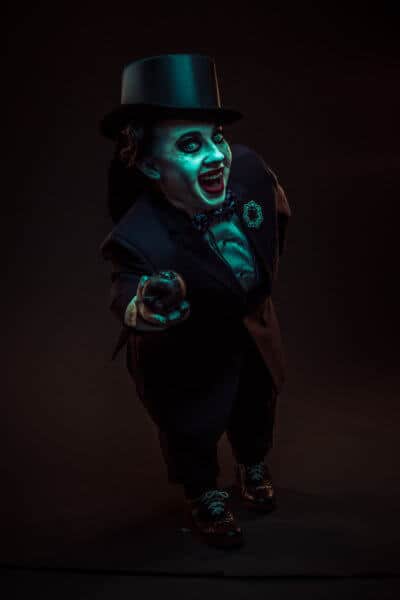 ITM:  What I saw today was 35 minutes long with four total chapters, and it says ‘To Be Continued’ at the end. How is that working, is it broken into two larger parts?

Braver:  You saw season one. Season two is another six chapters. That’s written. You saw the [live] show in 2014, so [it will be] the rest of [that] show, but there are changes within there as well, too. It’s a little longer, season two. But we just gotta get this out there and have it do well, and then we’ll shoot [the rest]. It’s written, we just gotta shoot it.

ITM:  Finally, I don’t want any spoilers because I’m going to be doing it, but what can you tell me, on an experiential level, about what we can expect from “Delusion: The Blue Blade” this fall?

Braver:  I always equate this one to being more of an adventure. The other ones have really terrifying moments, and this one does too, of course, but this one’s really this grand, epic adventure in the vein of ‘Raiders of the Lost Ark.’ It’s really like ‘Raiders’ meets ‘Time Bandits,’ [with] time travel. I actually watched ‘Raiders of the Lost Ark’ last night and I had some new ideas about it. It’s so much like that, it’s so funny. It’s just this big, epic [adventure]. I’m hoping everybody will be able to get what I’m trying to give them in this hour-long story.

We’re touching upon things we have never done before: different time periods, different setpieces. We have some of the biggest setpieces we’re building for this show. You go back in time, I will say pretty far, and we’re hoping that people will actually feel that transition between time periods. But the show’s not about time travel; that’s a method to get there. We have some really cool characters. It’s a “Delusion” story, but vastly different in tone. 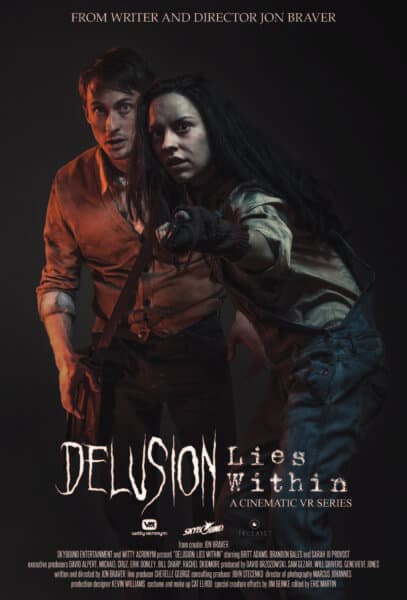 “Delusion: Lies Within” is coming soon to Virtual Reality platforms.

Be sure to visit the official “Delusion” website for more information.