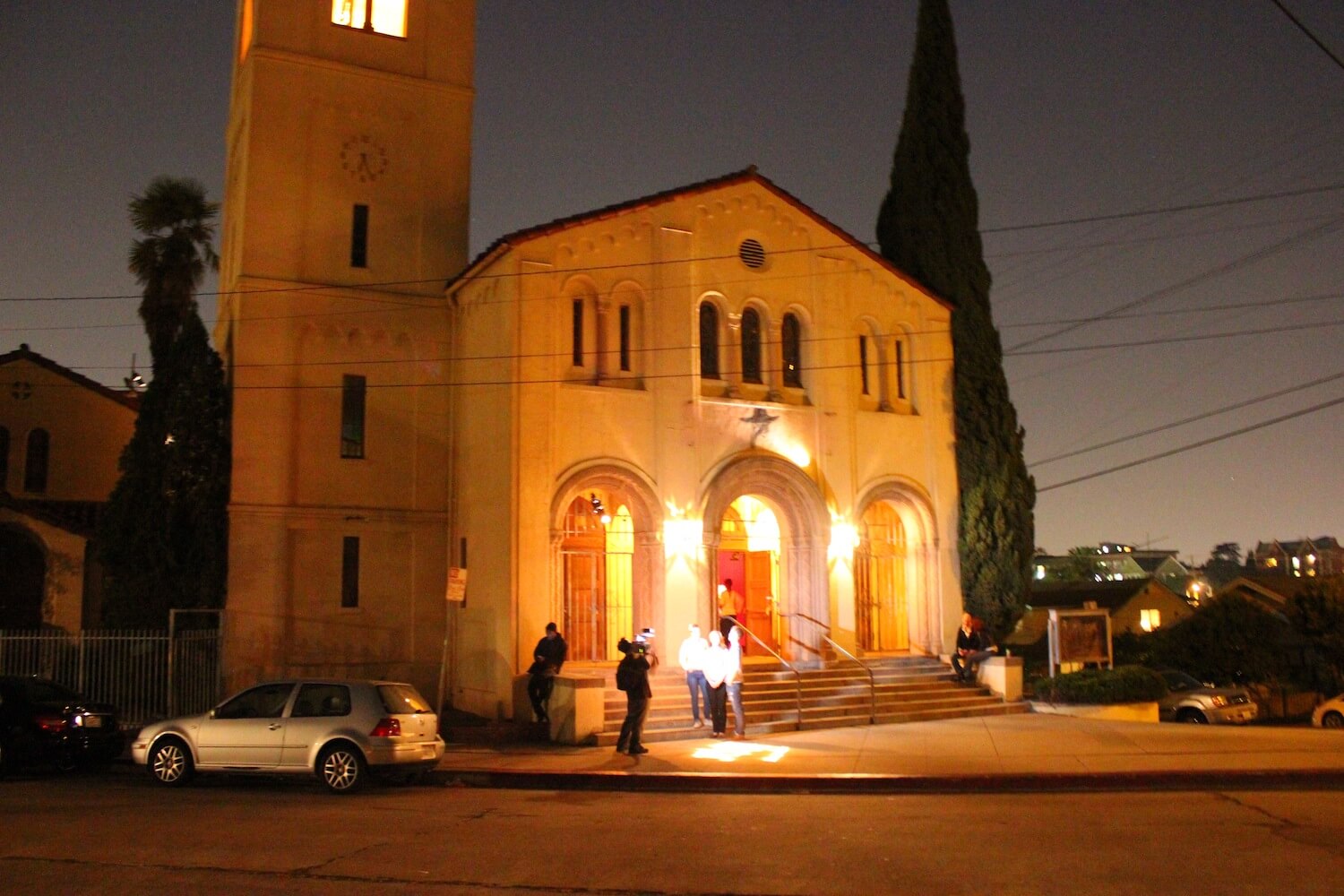 Driving down an unfamiliar path leading through a darkened Los Angeles suburban neighborhood late at night, I come across green wands waving me toward a parking space alongside signs asking me to remain quiet and respect the neighbors.

On foot, I’m directed down the street where my attention is drawn to an old church, both inviting and eerie. It’s the setting for Delusion: Masque of Mortality. Inside, smiling faces bathed in blaring red light greet me as I check in, part of a small group that will experience what’s referred to as a “haunted play” at a reserved time. A bit unsure as to what to expect, I nervously smile back, awaiting whatever fate this unusual location has in store for me. Led up stairs, I’m asked to hang around a lounge until my time comes. The indoor-outdoor space is welcoming with comfortable seating and a flurry of activity from others who are eating, drinking, and socializing. I indulge, enjoying a mint drink and cheese pastry. A magician wanders, doing standard card tricks with enough personality and flourish to make them entertaining. I decide to wander too, taking note of the somewhat creepy tone the decorations have set. I suddenly find myself standing next to actor Neil Patrick Harris, producer of last year’s Delusion event. We exchange a few words, with me bringing up the names of a few mutual friends – nothing but smalltalk to pass the time. He walks away and I notice actress Amy Acker is also in his group. Yes, I am indeed in Hollywood.

Continuing around the lounge, I pick up one of the many Playbills scattered about. Briefly flipping through, I’m starting to understand that Delusion is not just a “haunted play” by name. It is indeed an actual play, with actual actors. I’m more excited than ever. And that’s when my group is called, or summoned rather, into the first chamber. It’s me along with 8 or 9 strangers, mostly couples, some of whom are discussing last year’s experience. I detect a sense of anxiousness from them, making me even more eager to see whatever is about to take place. And then it begins.

For the next hour or so, I am completely enthralled by what can best be described as an intimate and interactive performance of a well scripted play. It stars wonderfully talented actors who believably portray characters eluding the grasp of plague doctors that, from what I learn, are unnecessarily taking the lives of others. But unlike sitting in a theater and watching a play, following the story of Delusion is a bit hard as all participants are asked to truly take part every step of the way.

The video below offers a taste of what the experience is like, featuring clips from last year’s entirely different version of Delusion:

Throughout the experience, each member of my group is personally addressed, myself included, making regular eye contact with actors often a foot or two away. We’re led up and down stairs, in and out of theatrically lit rooms, ducking in and out of tight spaces, all while actors are filling us with increasing fear of getting caught – fear of what the evil plague doctors might do to us.

But Delusion doesn’t simply require its visitors to go through the motions and watch. At one time during the experience I found myself in a costume, locking arm-in-arm with a woman I’d just met, treating her as my prisoner. At another time, my entire group was frantically diving into hiding spaces to avoid detection. And, in a bold move for the benefit of my group, I volunteered to play dead and get wheeled away by a deranged mortician.

Though Delusion does have a few startles, at no point does it resemble any sort of traditional haunted house experience. It’s never gory, offensive, or inappropriate. Instead, it relies on clever storytelling, brilliant acting, and an overall sense of adventure – albeit a creepy adventure – to lead its guests on a path that makes it more enjoyable than any other Halloween attraction I’ve ever seen. And it culminates with a bang, sending guests literally running out the exit, but leaving everyone wanting more.

Everyone should experience Delusion: Masque of Mortality.

Tickets and more information can be found at hauntedplay.com, with performances continuing on select nights .

Update (11/6/13): The remainder of the event in November has been cancelled due to permitting issues. The group wrote on their Facebook page, “We have been trying hard to resolve the situation but various limitations combined with an ongoing very small, but vocal, opposition to the play have led to this unfortunate conclusion.” Refunds are being issued for those who did not get to experience it. Comments Off on Delusion hails as Halloween’s finest horror experience, an interactive haunted play that stuns with top Hollywood talent