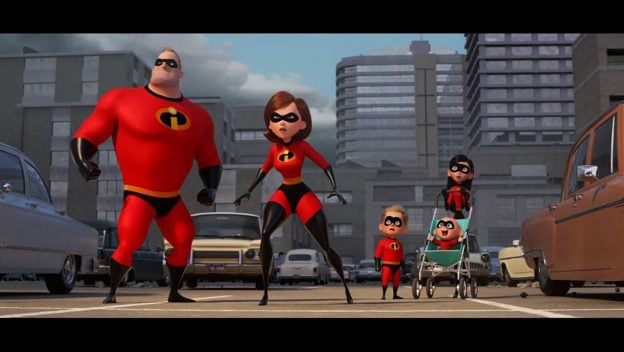 Disney-Pixar’s “Incredibles 2” lands in theaters in June, but for a limited time starting in May, Guests at Disney Parks can get a sneak peek of the first 10 minutes of the new movie.

Beginning May 18, Guests can visit Walt Disney Presents at Disney’s Hollywood Studios and Sunset Showcase Theater at Disney California Adventure to preview the movie in stunning 3D with in-theater special effects. Samuel L. Jackson, who voices Frozone in the “Incredibles” movies, shares details on the sneak peek below.

Here’s a synopsis of the long-awaited sequel to “The Incredibles”:

In “Incredibles 2,” Helen (voice of Holly Hunter) is called on to lead a campaign to bring Supers back, while Bob (voice of Craig T. Nelson) navigates the day-to-day heroics of “normal” life at home with Violet (voice of Sarah Vowell), Dash (voice of Huck Milner) and baby Jack-Jack—whose super powers are about to be discovered. Their mission is derailed, however, when a new villain emerges with a brilliant and dangerous plot that threatens everything. But the Parrs don’t shy away from a challenge, especially with Frozone (voice of Samuel L. Jackson) by their side. That’s what makes this family so Incredible.

In addition to the sneak peek, Guests at Disney Parks have even more “Incredibles”-themed fun to look forward to this summer. On May 25, Walt Disney World kicks off their “Incredible Summer” event, which celebrates all things super. On June 23, the new Incredicoater debuts with Pixar Pier at Disney California Adventure and sees the Parr family racing alongside you in an attempt to catch little Jack-Jack.

“Incredibles 2” voice cast announced along with character descriptions and images

Disney-Pixar’s “Incredibles 2” arrives in theaters on June 15, and you can see the new trailer here.