There’s no doubt that Disney can put on a good show.  For over ninety years Mickey Mouse and pals have been perfecting performances.  Exciting experiences and dazzling displays of wonder within theme parks have benefited from this tried and true tenure.

Amazing attractions and delicious dining destinations await guests at the company’s theme parks and cruise ships.  Showtime at Disney is just as enchanting with hundreds of live performances, a plethora of pyrotechnic crowd pleasers as well as animatronic and electric visual delights. Of these scores of shows listed below are 5 featured favorites. 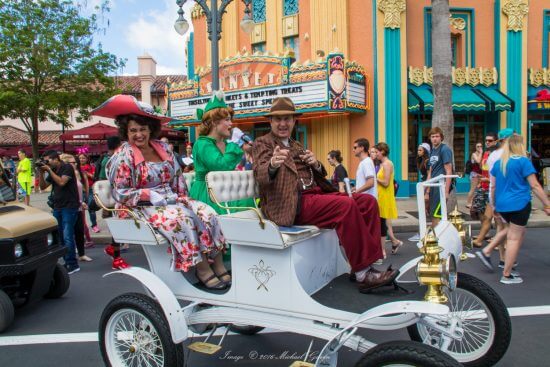 I’ve been a fan of the Muppets since day one of the original “Muppet Show.” This was most likely influenced by Jim Henson’s friends appearing first on “Sesame Street.”  Bringing these crazy characters and their special style of showmanship to Liberty Square in 2016, also earned my admiration.  History, comedy and Muppet mayhem make “Muppets Present Great Moments in American History” a perfect patriotic blend of entertainment.  Shows take place several times daily just in front of the Hall of Presidents.

4. March of the First Order

A new Star Wars trilogy means new characters to showcase from Disney’s acquired empire.  Disney’s Hollywood Studios, home to Star Tours and the recently retired Star Wars Weekends, is the perfect place for a parade of new order Stormtroopers known as “March of the First Order.” In this case the terrorizing troops march under command of chrome clad Captain Phasma.

Initially intended to be a short term entertainment option for the newly opened Walt Disney World Resort, this simple show of aquatic parade floats depicting sea creatures alternating with patriotic images (which were part of a special Bi-Centennial celebration in 1976 and ran through 1995) wowed me as a child; today that wonder is now filled with nostalgia. This simple light-bright like pageant still performs nightly on the waters of the Seven Seas Lagoon and Bay Lake.

As a huge fan of the former Adventurers Club, witnessing the Streetmosphere antics of Disney’s Hollywood Studios Citizens of Hollywood always catches my attention (as it has since the park’s opening day in May of 1989).

“Get pulled into the magic and become part of the Hollywood that never was, and always will be. The Citizens are ready for their close-up, but they’re never gonna make the big-time without a little assistance from the audience. Hey, that’s you!” – Disney.com

Having the privilege of witnessing early versions of this vexing nighttime nightmare during the precursor to Mickey’s Halloween Party, known as the “Happy Haunts Ball,” this show has been and will most likely remain my favorite fireworks ever featured at the Magic Kingdom.  The prefect blend of villains and Halloween, this show is a must see for any fan of fiendishly fun fall festivities.

Mix the Dapper Dans with macabre melodies of Halloween and the end result is pure ghoulish delight.  A perfect addition to Mickey’s Halloween Party, this creepy cool collection of undead haunted harmonizers set a perfect paranormal tone for the event.

Any of these five favorite entertainment experiences at Walt Disney World’s Magic Kingdom make the words “It’s Showtime” even more enchanting.  From whimsical to happily haunting, during a theme park escape, I’ll gladly take the time to enjoy each the above mentioned magical moments.

What is your favorite show at Florida’s Walt Disney World Resort?  Please script your own comments below.

Comments Off on Fav 5 shows at Walt Disney World