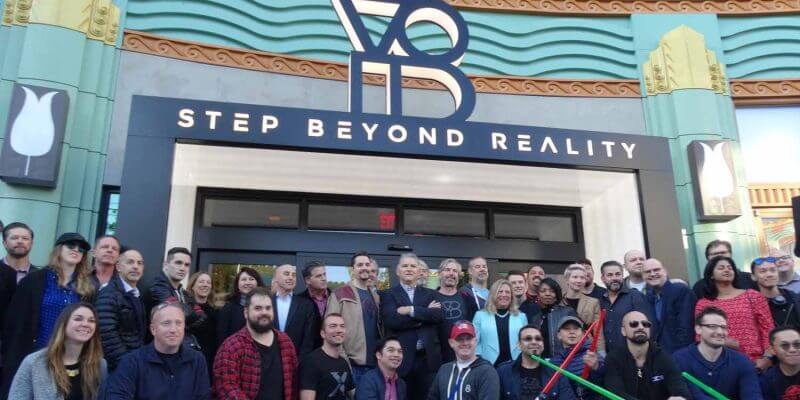 After its grand debut at Walt Disney World three weeks ago, The VOID‘s impressively immersive hyper-reality Star Wars experience “Star Wars: Secrets of the Empire” has made its way to the west coast, opening in style at Disneyland Resort‘s Downtown Disney District this morning.

During the ribbon-cutting ceremony, Disneyland Resort Ambassador Mikey Trujillo introduced the creative team and executives behind this group effort from Lucasfilm, The VOID, and ILMxLAB. They were preceded by a squadron of Stormtroopers, who appropriately accosted the crowd of media gathered for the momentous occasion, searching for Rebel spies in the audience.


Once we had a chance to experience the thrill of “Secrets of the Empire” for ourselves, we were given the opportunity to speak with The VOID’s chief creative officer Curtis Hickman and ILMxLAB’s executive creative producer Mark Miller about what it took to put this must-see new “Star Wars” adventure together.


Having gone through “Secrets of the Empire” a few times now (and The VOID’s “Ghostbusters: Dimension” experience previously) I can say that– as mentioned in the above interview– it’s an incredibly memorable, visceral undertaking that defies explanation to those who have yet to see it for themselves.

The simplest way I can put it is to think of advanced virtual reality, but moving through real, physical space. You’ll walk through hallways, ride shuttles and lifts, and face off against the Empire with you and group of three other participants. If you see a wall, or lever, or even a droid in front of you, reach out and touch it. It will be there. Truly, “Secrets of the Empire” is a Star Wars experience like none that have come before, and it’s a perfect way to fill the gap between now and the opening of Star Wars: Galaxy’s Edge at Disneyland next year. Be sure to visit The VOID’s official website for more information and ticketing resources. Comments Off on VIDEO – The VOID’s “Star Wars: Secrets of the Empire” brings amazing hyper-reality experience to Disneyland Resort