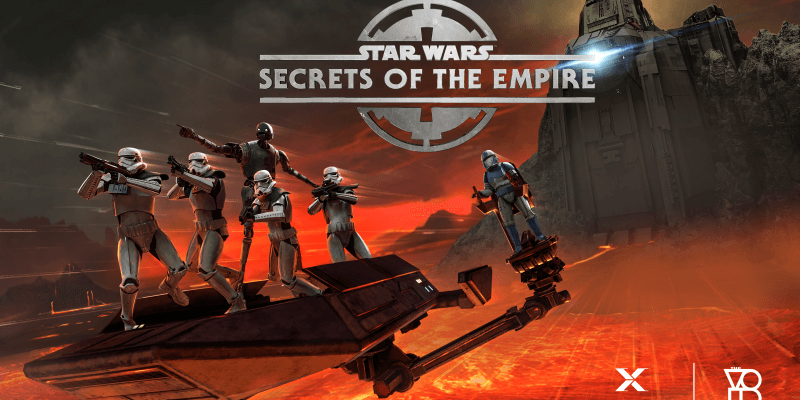 Fans eagerly awaiting the opening of Star Wars: Galaxy’s Edge in 2019 can already get a sense of what it will be like to step inside the battle between the Dark Side and the Light as The VOID has officially opened their “Star Wars: Secrets of the Empire” immersive VR experience at Disney Springs.

This is virtual reality like none other. You can’t replicate this experience at home. The VOID has brought its state-of-the-art tactile VR technology to Walt Disney World, not only allowing guests to see the Star Wars world around them via VR headsets, but also feel it both by haptic vests as well as literally being able to reach out and touch the virtual world around them. Plus, it’s a completely free roaming, tether-free experience, which offers maximum freedom to explore and fight the bad guys. “Step Beyond Reality” is the tagline for The VOID and it’s an appropriate one, as once the VR headsets are set up and engaged, the real world disappears completely, offering an experience that truly feels like you’re suddenly transported into another world.

It all begins by entering a fairly nondescript space, formerly occupied by a portion of the World of Disney store at Disney Springs. It’s now been converted to largely black / dark grey walls with little design. The first step after buying a ticket (roughly $30 per person) is watch a pre-show video featuring actor Diego Luna reprising his role as Cassian Andor from “Rogue One.” While the timeline doesn’t entirely make sense, Cassian sends you on a mission to retrieve some kind of all-important crate with mysterious contents. You then choose your Stormtrooper accent color and you’re on your way.

Next, you’re equipped with your backpack and headset, which is quite a lengthy process. The equipment is fairly heavy and takes a lot of adjustments to sit just right. The headset has high-resolution screens and lenses, offering an optimal virtual reality experience. Those familiar with the tech will still see the “screen door” effect, but the resolution is extremely high that it’s easy to ignore that issue. Getting the backpack and vest to sit securely requires pulling multiple sets of straps and feels a bit like you’re going through airplane life vest safety training. Once ready for battle, you enter a small room and pull down your visors, at which point the real fun begins.

Suddenly Star Wars takes over your entire field of view. Your fellow participants (up to 4 at once) are now Stormtroopers, a shocking moment to see them standing directly next to you. The system recognizes arm, hand, and finger movements with surprising accuracy, so not only can you see them motioning but you can look down and see your own limbs as well. It’s fun, although slightly silly to see a bunch of Stormtroopers staring at their own hands.

K-2SO quickly greets you (voiced by Alan Tudyk, like in “Rogue One”) in the first room and becomes the first tactile element. You can literally reach out and touch his metal body in real life, matching up with the virtual version you see on screen. This impressive trend continues as you sit on seats that match the virtual visuals, touch walls, reach for railings, peer around corners, go through doorways, and interact with buttons. This is what separates The VOID from any other VR experience around. The real world components as you wander freely around simply feels natural and makes the virtual world seem that much more real.

You literally feel the heat and smell burning as you descend and elevator toward the lava of Mustafar, home of Darth Vader’s castle. You may even get a slight sense of vertigo as you feel like you are tremendously high up on a platform surrounded by Stormtroopers. Now, you are a rebel disguised as a Stormtrooper, of course. And that means you’ll be discovered, of course, and end up having to fight. At one point, you find and pick up blasters and discover just why Stormtroopers are notoriously bad shots. There is a seemingly infinite number of bad Stormtroopers to shoot at while you wander from room to room, instructed by K-2SO on where to go. And blaster shots are not even remotely accurate, which is both amusing and frustrating. But it’s a whole lot of fun to blast away at everything in sight – even your fellow teammates.

Ultimately, there is a final showdown with Darth Vader himself, which is frightening initially but then slightly disappointing as James Earl Jones did not provide the voice for this incarnation. Nevertheless, the most “Star Wars” moment of the entire experience.

Completing the mission takes around 10-15 minutes, depending on how quickly you move. You could arguably drag your feet and excessively look around, touching everything in each room stretching it to 20+ minutes, but you’d probably get bored quickly once the action subsides. It is a linear experience, so there are no real choices to make nor is there freedom to explore on your own, both of which would be nice touches.

Overall, this virtual reality Star Wars experience will be far less impressive once Galaxy’s Edge opens in a couple years. But until then, this is absolutely the best way to feel like you are a part of a galaxy far, far away. And it’s definitely a fantastic addition to Disney Springs, which now features a wonderfully entertaining attraction of its own.