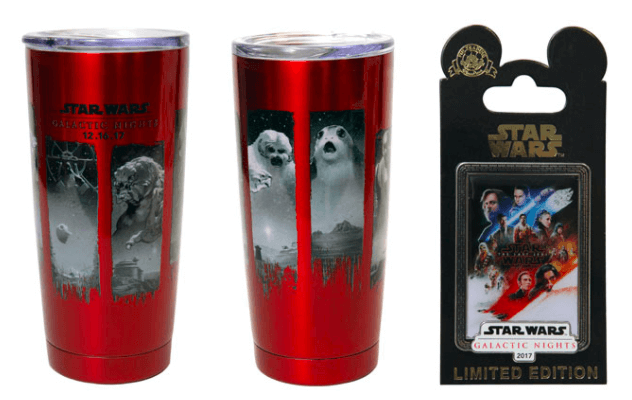 With “Star Wars: The Last Jedi” about to hit theaters next week, the level of Star Wars buzz is at a peak as fans all over the world can hardly contain their excitement.

As if the new film wasn’t enough, Star Wars Galactic Nights is set to return to Disney’s Hollywood Studios as well, and Disney has all the merchandise that Star Wars fans could possibly want.

Amongst that new merchandise, is some apparel commemorating this year’s event. Attendees will also be able to purchase event-exclusive tumblers and pins. Guests attending the event will also be able to receive a complimentary commemorative holiday ornament by showing their proof of purchase or ticket stub from the opening weekend of “Star Wars: The Last Jedi.” And, even though the movie hasn’t come out yet, it’s never too early to start getting excited for the next film. A new “Solo: A Star Wars Story” T-Shirt will be available at the event, marking the first merchandise based on the upcoming film available in Disney Parks. This shirt will be available at Star Wars Galactic Nights before rolling out to various locations the next day.

Guests who want to really go to the next level to show off their Star Wars pride, can visit the Senses – A Disney Spa Pop-up experience on Sunset Boulevard. There, guests can receive a Star Wars makeover, which includes hair styling, nail art and makeup.