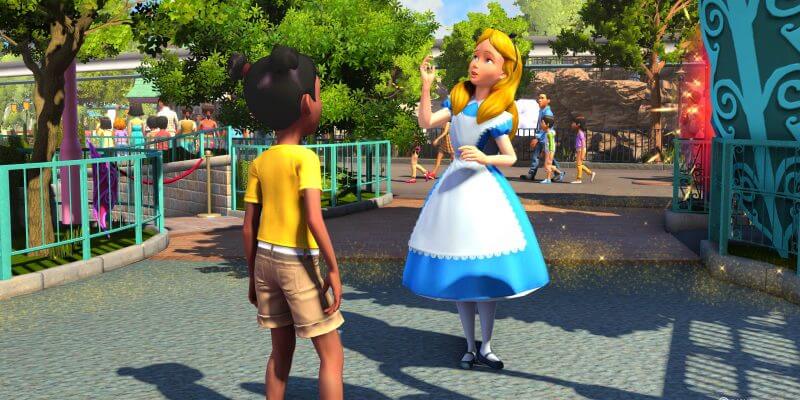 A little over five years ago, Microsoft Studios teamed with Disney (as well as developers Frontier and Asobo) to release two games for the Xbox 360: “Kinect Disneyland Adventures” and “Kinect Rush: A Disney-Pixar Adventure.” Now both games have been remastered in glorious 4K Ultra HD and HDR for reissue on Xbox One. This past weekend I was invited to Disneyland Resort to check them out.

Under the new Kinect-less titles “Rush: A Disney-Pixar Adventure” and “Disneyland Adventures” (though they’re still compatible with the Xbox One’s Kinect peripheral) the remastered games have been priced down to $29.99 and are also available on PC. The presentation at the Disneyland Hotel started with the Pixar-themed title, which provides high-energy action in the worlds of “Toy Story,” “Cars,” “The Incredibles,” “Ratatouille,” “Up,” and “Finding Dory.”


Players explore a “Pixar Park,” meet new friends, and interact with Pixar characters while solving puzzles, uncovering hidden secrets, and race through a variety of different areas. Perfect for younger gamers, “Rush” works in both single-player and cooperative modes. Recognizable voice talent from the Pixar feature films and theme park attractions help immerse players in the iconic universes of these very popular movies.

The second game demonstrated at the event was “Disneyland Adventures,” which is the ideal investment for fans of Disney theme parks themselves. Featuring all the most famous characters and lands (prior to the construction of Star Wars: Galaxy’s Edge, of course) from Walt Disney’s original Magic Kingdom, the game renders the park in 3D virtual space with an attention to detail I’ve never seen before.


Main Street USA, Fantasyland, Tomorrowland, Mickey’s Toontown, Frontierland, Adventureland, New Orleans Square, and Critter Country: they’re all here, and they’re all explorable. Hunt for Hidden Mickeys, interact with more than thirty-five characters around the park, and use your magic wand and other tools to trigger special effects in the decorations. You can even purchase different outfits for your highly-customizable child-sized avatar.

Interestingly, the biggest difference between the in-game park and its real life counterpart is the attractions. Instead of riding through an authentic dark ride in the Haunted Mansion or Peter Pan’s Flight, players are challenged with fast-paced mini-games not dissimilar from the ones in “Rush.” For example, Goofy takes you on a perilous ski trip down the Matterhorn, and Space Mountain delves into the world of “Tron.” It’s a fun spin on what Disneyland fans might expect when entering these attractions, but it’s also just a little disappointing to not have the option to ride the actual rides themselves. Overall, I enjoyed the Xbox presentation on Friday and had a lot of fun experimenting with both games, though I have to again emphasize they are indeed targeted toward families and younger children, especially with “Rush.” As an adult Disney fan, I definitely appreciated the true-to-form nature of the worlds and characters presented, though once again my absolute favorite part of the experience was the attention to detail in “Disneyland Adventures.”

Beyond the fun-but-disposable minigames scattered around the park, “Disneyland Adventures” is actually a terrific resource for anyone who wants to explore the first Disney theme park in great detail on their own time, without having to travel to Anaheim. On that level I could see a grown-up Disney-a-holic enjoying the game, but it’s still probably best played alongside a younger companion to truly get the most out of it. “Rush: A Disney-Pixar Adventure” is strictly a kids-only affair, but it’s superb for that audience nevertheless. Both “Rush: A Disney-Pixar Adventure” and “Disneyland Adventures” are available now for Xbox One and Microsoft Windows 10. Comments Off on VIDEO – “Disneyland Adventures” and “Rush: A Disney-Pixar Adventure” video games arrive remastered on Xbox One