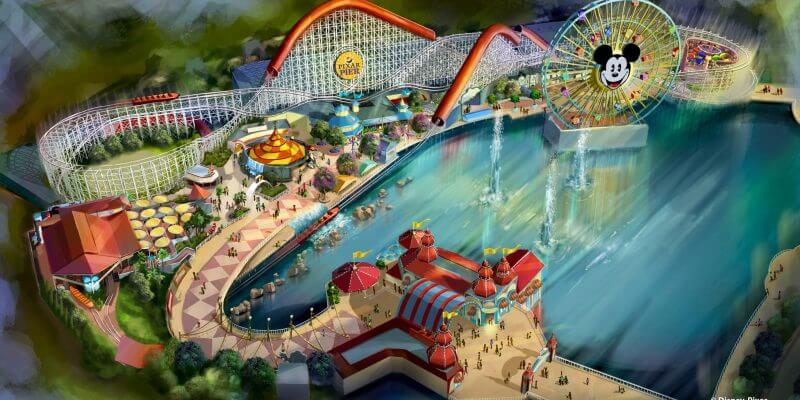 The wonderful worlds of Pixar will get a new home at Disney California Adventure when Pixar Pier opens in summer 2018, transforming the area that is now Paradise Pier with the thrilling, new Incredicoaster, four new imaginative neighborhoods, plus entertainment, themed food and beverage, and merchandise. Guests will experience Pixar stories and characters in incredible new ways on this seaside waterfront at the Disneyland Resort.

Related: Popular Pixar Pier Restaurant Is Reopening After ONE YEAR!

Pixar Pier, a permanent land along the southern shore of Paradise Bay, will debut during Pixar Fest, a limited-time event that begins April 13, 2018. As a new land, Pixar Pier will introduce the exciting new Incredicoaster plus four whimsical neighborhoods where guests step into beloved Pixar stories.

These new neighborhoods will include: To prepare for these big changes, several attractions will close Jan. 8: California Screamin’, Mickey’s Fun Wheel, Games of the Boardwalk and Sideshow Shirts.

Ariel’s Grotto restaurant and the Cove Bar will be transformed into a Pixar-themed lounge offering sparkling views of Paradise Bay and the new Pixar Pier. Ariel’s Grotto and Cove Bar will close Jan. 8, with Cove Bar reopening briefly in April before its permanent transformation. Guests wishing to reserve “World of Color” dining packages after Jan. 7 may consider Carthay Circle Restaurant or Wine Country Trattoria.

The opening of Pixar Pier will add to the fun of Pixar Fest, a celebration of friendship that begins April 13, 2018. Pixar Fest will include the new fireworks show, “Together Forever – A Pixar Nighttime Spectacular;” the return of “Pixar Play Parade,” appearing for the first time at Disneyland Park; the return of “Paint the Night,” performing this time at Disney California Adventure, and new elements added to each of those parades. In addition, guests will find friends from Disney•Pixar films, creatively themed food and beverage items, and merchandise that’s exclusive to Pixar Fest. All of these exciting changes add to the existing attractions and entertainment that feature many favorite Pixar characters and stories: