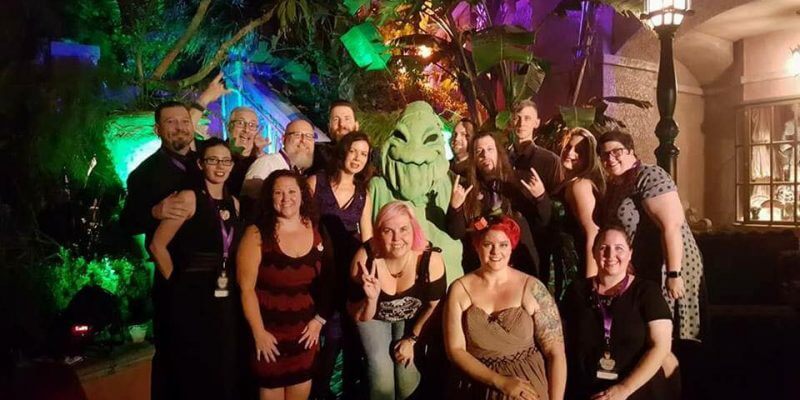 Produced by Florida Super Con and Spooky Empire’s Ultimate Horror Convention, fear fans found themselves with several opportunities to show their spooky side while enjoying events at Walt Disney World. The home base of Spooky Day in the Parks weekend was the Coronado Springs Resort.  There, a host of horror happenings heralded hopes for the first fiendish festival of what’s intended to be an annual event.  Within the ballroom of the Coronado Springs convention space, vendors offered a variety of various spooky and Disney themed merchandise and Halloween themed items for sale.  The Bazaar took place on Friday evening and all day Saturday. Disney’s Haunted Mansion and the fans that fawn after the ghostly retirement home is the subject of a wonderful whimsical ninety minute documentary entitled, “Foolish Mortals.”  This delightful documentary about Disney’s ultimate dark ride was shown twice over the weekend, marking the first (and second) time the “unofficial” story was shown ON Disney property. Along with magnificently monstrous merchandise, those attending the event were treated panels on cos-bounding (a lighter version cosplay conceived to court the costume guidelines for adults who also want to dress up while enjoying the theme parks).  Experts offered tips and tricks on getting into the spirit of a favorite character.  These included a list of online sources like Unique Vintage, Lindy Bop and, for make-up, Urban Decay. Along with the Disney bounding panel, “Foolish Mortals” Producer  Ryan Grulich and Director James H. Carter II hosted a panel with former Disney Imagineer Jason Surrell.  The Haunted Mansion took center cemetery for an informative discussion.  Be sure to watch the full panel from our coverage of the “Foolish Mortals” East Coast premiere. The Hollywood Tower Hotel became the backdrop for a Friday night VIP party, Gala at the Tower, which featured fiendishly fun food, a ghoulish gathering of Disney villains and the opportunity to drop in at the Twilight Zone Tower of Tower for as many ups and downs desired during the eerily enchanting evening.  Attendees also received an exquisitely designed exclusive pin commemorating the event. Encouraged to exhibit their Disney (or horror) bounding best, guests gathered for meet-ups at the Magic Kingdom on Saturday afternoon.  Amid the photo-ops and frolicking in the park, a surreal surprise enchanted one event guest in particular. 999 happy haunts witnessed a wedding proposal (and acceptance). This magical moment manifested, appropriately, within the stretch room of the Haunted Mansion.  Congratulations! Sunday morning (mourning?) brought an end to the inaugural event with a character breakfast hosted by Mickey and Minnie Mouse. Did you attend the Spooky Day in the Parks event?  What was your favorite moment(s)? Please share your adventure in the comments below.