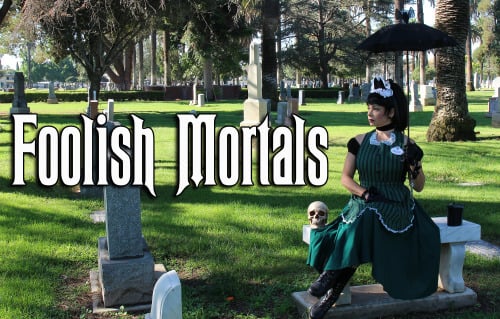 The fan-focused film “Foolish Mortals” is a 90 minute documentary about Disney’s famous haunted attraction and the devoted admirers who swear that the ride is to die for.

This past weekend (September 22-23), “Foolish Mortals” made its East Coast debut as part of the Spooky Day Bazaar for Spooky Day in the Parks at Walt Disney World in Florida.  Prior to this viewing, “Foolish Mortals” had only been shown in public once before, July 15th during a D23 event in Anaheim, California.

“Foolish Mortals” digs into the history of Walt Disney’s retirement home for ghosts through the eyes of fans and imagineers.  Spell Caster media manages to give a ghostly glow to the fans and allure of the attraction.  Fiendishly featuring experts like imagineer Rolly Crump, former imagineer Jason Surrell and Doombuggies.com creator Jeff Baham as well as artists like Topher Adam and Bats Day in the Fun Park founder Noah K. “Foolish Mortals is a documentary that focuses on the fan culture surrounding Disney’s Haunted Mansion!

Wonderfully weaving ride history and fan interviews, “Foolish Mortals” sheds light into the creepy cool realm of Mansion mania with respect and cleverly crafted stories revealing the passion of those who love Disney’s iconic haunted house.  Interspersed with these insightful interviews are fun facts about the Haunted Mansion and its various incarnations around the world.

The viewing in Central Florida was part of the Spooky Day in the Parks weekend produced Spooky Empire, one of the nation’s largest horror conventions.  During the event two screenings were held and guests had the opportunity to purchase a DVD copy of the documentary (of which there is a very limited pressing). As the end credits began to roll, James and Ryan made their way back to the front of the room and introduced former Disney Imagineer Jason Surrell.  A panel discussing “Foolish Mortals” and the Haunted Mansion followed. For more on this delightful documentary, be sure to check out ITM’s interview with Ryan Gulch and James H. Carter II.