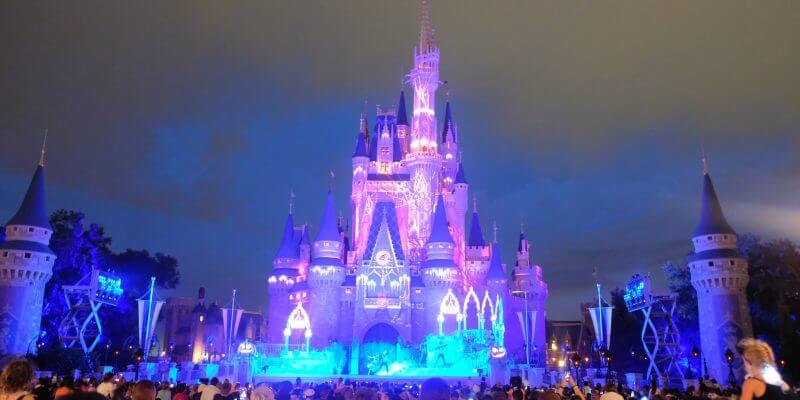 This spooky event begins with a tasty and spooky treat! Upon entering into the park, guests are immediately given candy bags to store their candy, which they will collect at stations found throughout the park. Cast Members even give you a head-start with a special small pouch full of candy for your bag. Sponsored this year by M&Ms, candy-collecting spots are located in every section of the park. Each candy collecting spot is identified with a special inflatable sign that reads “TREATS!” If you’re nice, a Cast Member might even give you two handfuls of candy. I got lucky a few times at the event. After stopping at only three candy collection spots, I came home with a full bag of treats. Mickey’s “Boo-to-You” Halloween Parade is a fan-favorite part of the event each year. This parade features a collection of Disney characters in Halloween costumes, this includes Disney heroes and villains! Magic Kingdom’s Haunted Mansion ride also gets a spotlight in the show. The Haunted Mansion floats are particularly memorable – one of the floats even features the famous Hitchhiking Ghosts, which glow as they float by. The event also has a special nighttime fireworks show, the Happy HalloWishes Fireworks. But don’t let the name fool you – this isn’t the same “Wishes” show that recently ended at the Magic Kingdom. The Halloween time show features a high-flying spider web of pyrotechnic effects and haunting music. HalloWishes kicks off with the Ghost Host from The Haunted Mansion, inviting guests to “drop in” as Disney Villains light up the night with fireworks. This fireworks show definitely is top-notch, nothing short of the many other special fireworks displays that explode over the castle throughout the year. A few of the spooky songs that are featured during the show include “Grim Grinning Ghosts,” from the Haunted Mansion attraction, “Poor Unfortunate Souls,” from The Little Mermaid, “Never Smile at a Crocodile,“ from Peter Pan and “The Skeleton Dance,” from Silly Symphonies. Guests at the event also get a special visit from the mischievous Sanderson Sisters from Disney’s “Hocus Pocus” in the nighttime show, Hocus Pocus Villain Spelltacular. This stage show features Disney’s vilest villains, which let guests witness some chills and thrills. When the Sanderson Sisters return to the mortal world to throw a Halloween party, they certainly run amuck as they decide to use their magic to host a wicked and fun fest. During the show, the three sisters mix sinister shadows, terrifying nightmares and nefarious powers of their villainous friends to put together the ultimate Hocus Pocus Party Potion. All while casting a spell on everyone in Magic Kingdom park. Some special appearances you can expect during the show include, Dr. Facilier, Oogie Boogie and Maleficent. The whole show features special projections on the castle, dancers, fireworks and great music.

Throughout the night, Main Street is lit with special lighting and projections during the event. Guests can expect colored lights flashing in sync with music, which plays throughout the street. Main Street is also decorated with animations that project and move on the buildings. Some of the animations include ghosts and other happy and spooky creatures. The Jack-o’-Lanterns found on the tops of Main Street’s buildings are also lit and flash in sync with music during the event. Mickey’s Not-So-Scary Halloween Party is running select nights now through November. For more information about the event and tickets, refer to the official website.