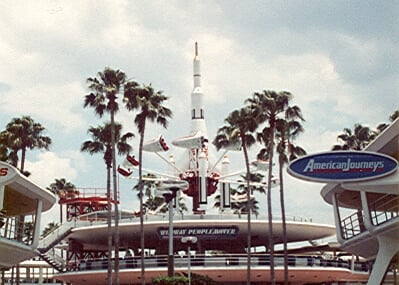 “Immersive entertainment” with all its trendy technology and modern marvels makes today’s new theme park attractions appear as amazing accomplishments of futuristic fun. In reality the concept has been around since the turn of the twentieth century.

In part four of our series, “Tomorrowland of Yesterday,” we’ll explore a version of this enveloping entertainment: Circle Vision 360. Perfecting a technology first used in 1900, Walt Disney Imagineering (WDI) created a full circle of movie screens to completely surround guests.  Using nine screens and nine projectors the action unfolded just above the heads of viewers.  Similar to Google Earth’s filming process, a special rig of nine cameras were used to create the Circle Vision movie.  These nine films were simultaneously shown on screens directly across the room, projected from small gaps between the giant curved screens. The Magic Kingdom’s Circle Vision 360 Theater opened in Tomorrowland, at Walt Disney World (FL), in November of 1971.  “America the Beautiful,” and updated version of the 360 movie first shown at Disneyland in 1955.

The final original version of Circle Vision 360, “American Journeys” was shown in the Tomorrowland theater from 1984 until its closing in early 1994.  This would be the last of this simple style of storytelling: a featured full circle film shown in the large circular theater at Walt Disney World.

With the re-imagineering of Tomorrowland into its current retro-future appearance, WDI updated the Circle Vision 360 experience.  The result of this 1994 update turned the attraction into the Transportarium. A name change into “Tomorrowland Metropolis Science Center,” half a year later, seemed to fit better into the new theme of Tomorrowland.

The updated attraction, also known as “Timekeeper,” brought with it a full storyline, preshow and host characters.  Robin Williams voiced the Timekeeper host animatronic and Rhea Perlman voiced Nine-Eyes, the time travelling robot which brought the images into the theater.  Jeremy Irons appeared as H.G. Wells in the film. “Timekeeper” was the first Circle Vision 360 film to incorporate CGI effects and a fully realized storyline.

Circle Vision 360, however can still be found around Epcot at the Canadian (“O Canada!”) and Chinese (“Reflections of China”) pavilions in World Showcase, both of which are set to receive a “seamless screen” update.

Catch up on previous installments of ITM’s “Tomorrowland of Yesterday” Series:
Part 1: Building Disney’s Future
Part 2: Taking Flight
Part 3: To the Moon, Mars and Beyond

Do you remember the early Circle Vision 360 films from this Walt Disney World Tomorrowland attraction?  Which one was your favorite?  Please circle around the comments section below and add your memories.