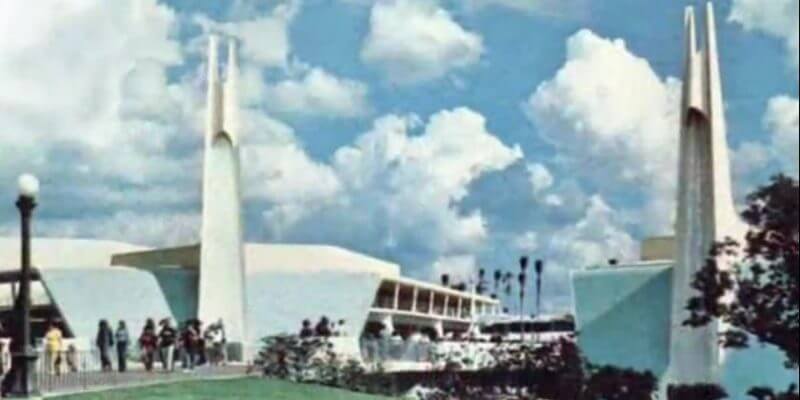 These current attractions are all set in retro-futuristic style that manages to evoke a nostalgic look at the future.  However, when the park opened in October of 1971, the land had a much different appearance. When Walt Disney World opened in 1971, Tomorrowland was very much unfinished. As late as one year prior to the park’s premier, plans for the area where still in flux. At one point the Monorail was supposed to pass through Tomorrowland (after exiting a never built Persian Resort).  By the time Walt Disney World actually opened the area had only two attractions operating: the Skyway to Fantasyland and the Goodyear Grand Prix Raceway. The other side of these structures relied on a view of the futuristic Contemporary resort hotel as part of the scenery.  This would be the only one of the park’s themed lands to deliberately allow a glimpse beyond the berm as part of the “show.” Over the next four years Tomorrowland would fill out additional structures that would house new restaurants and attractions.  By 1975 the area was finished.  Two large capacity dining areas had been added; though at the time one was considered part of Main Street. Attractions added included America the Beautiful and Flight to the Moon (late 1971); Star Jets (1974); Carousel of Progress, WED Peoplemover and Space Mountain (1975).  These attractions would undergo several changes over the years.  Several would disappear completely to be replaced by new adventures.

We will discuss these changes in future installments of “Tomorrowland of Yesterday.”