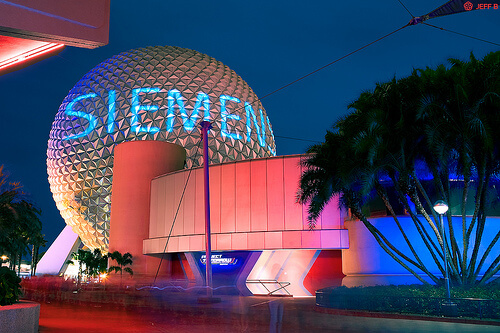 After a 12 year partnership, Siemens has announced the end of its partnership with The Walt Disney Company.

The companies first joined forces in 2005, with Siemens sponsoring several shows and attractions including Spaceship Earth and Illuminations: Reflections of Earth at Epcot. Siemens also sponsored the Project Tomorrow post-show area of Spaceship Earth, which included interactive exhibits based on Siemens technology.

“For the last 12 years, Siemens and The Walt Disney Company have enjoyed an exciting marketing and technology alliance that has brought tremendous visibility to the Siemens’ brand and joy to its employees,” said Siemens spokesperson Darren Sparks. “The Siemens/Disney sponsorship has evolved with the company’s changing portfolio since 2005 and has exceeded expectations. The sponsorship will reach its mutually-agreed upon end date October 2017. This successful relationship has truly been a fusion of creativity and innovation between the two organizations.” A new sponsor has not been announced yet, but it’s not unusual for Disney sponsorships to change over the years. Spaceship Earth was previously sponsored by AT&T, while Illuminations: Reflections of Earth was sponsored by GE. It’s possible those attractions will undergo changes as a result of new sponsorship.