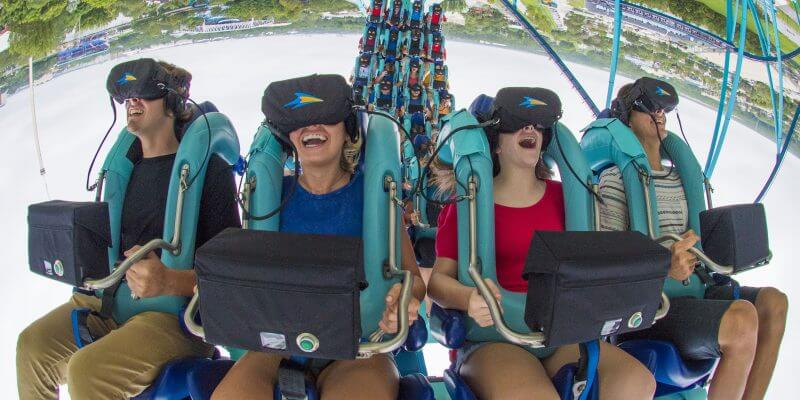 Prepare yourself for an epic new VR adventure at SeaWorld Orlando that will have you flying through the sky at 65 miles per hour–all while experiencing a computer-generated deep sea mission.

Starting this Friday, guests can take on this new experience first hand with Kraken Unleashed. SeaWorld Orlando has just finished its refresh of the park’s classic roller coaster, Kraken, by giving it an all new virtual reality addition. After guests are secured in the ride, they will now be prompted to strap on virtual reality goggles that will aid them in their deep sea quest. This undersea journey takes place alongside sea creatures that were inspired by extinct and legendary animals of the past, including the Kraken.

“You’re in an underwater world and you get to go in a submarine. The experience you’re gonna have is quite beautiful,” explained Brian Morrow, Vice President of Theme Park Experience Design for SeaWorld Orlando. “It’s all sea creatures. You get to go on this tour and a volcanic eruption happens, which opens a crack in the bottom of the ocean floor and in you get sucked. This is the drop into the first inversion of the ride – and then you’re in this imaginary and legendary world of sea creatures.”

Guests can still expect the same flips, drops and high speeds of the original Kraken roller coaster–only now the ride has the addition of virtual reality goggles. The updated ride’s high-tech add-on actually makes you feel like you are taking a deep sea dive in a submarine rather than flying high in a roller coaster. Once you place the VR goggles on your head, you instantly feel like you are transported from SeaWorld to a submarine docking station–or at least a digital recreation of one.

“We wanted another attraction in the portfolio and so we went and did some investigation on these other VR experiences you see on other coasters…. and we rode them and we were very disappointed in all of them,” added Morrow. “We just thought, this can’t be it. This can’t be the experience we want our guests to have. How can we make it the world’s best? So we started and that’s what we’ve created here. We believe this is the world’s best VR coaster experience for many reasons. Most of which relate to the video content and quality that’s been created. A lot of money and time has been put into that. Also the integration of the equipment into the coaster vehicle. You’re not gonna be handed a set of goggles to carry onto the ride.  It’s all there built into the harness and headset. There’s no phones involved, we’re using screens and really cool lenses.”

When the ride begins, you immediately are thrust into the illusion of being “submerged” underwater to start your expedition while experiencing the real-life G-forces of the Kraken roller coaster. Throughout the ride, you feel the whips and turns that match perfectly with the wild rendered visuals you see via your goggles. The ride’s rough shakes and rattles happen in sync with being attacked by some of the massive marine creatures that you virtually encounter during the trip. In all, it’s quite the exhilarating experience full of surprises, particularly on a first ride. That said, there are a few kinks to be found on the ride. While the high-resolution visuals look great, the “screen door effect” that plagues virtual reality is definitely present and somewhat distracting at first (though as the ride progresses it’s easy to look past that while feeling the G-forces). The new VR element also has a great soundtrack, but it’s often hard to hear over the loud roars of the coaster–something we’re told SeaWorld is working to improve. The rendered visuals are also not entirely smooth, rendered at a low frame rate that creates some jumpiness, particularly right after dispatch. And, of course, the headset itself is not exactly comfortable and rather clunky.

But all those hiccups aside, the overall virtual reality exploration is a satisfying addition to a roller coaster that formerly had seen better days. It’s an improvement that should make coaster fans want to head back to SeaWorld Orlando this summer to see what a high-speed adventure feels like when simultaneously soaring high in the air and underneath the sea.