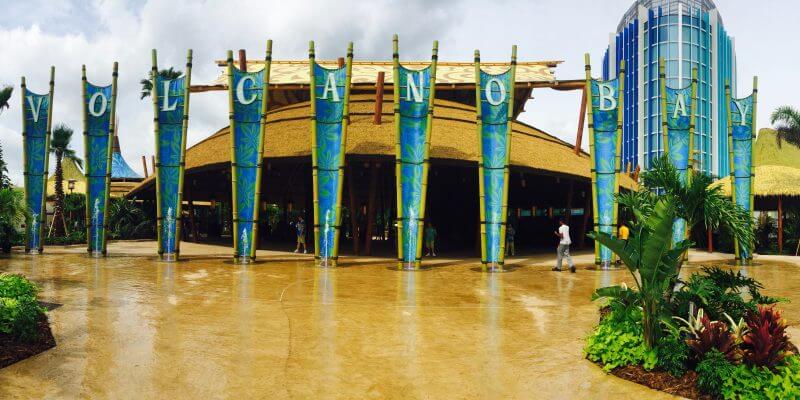 Announced last year, fans of Universal Orlando have been watching the park’s centerpiece–a 200-foot tall volcano–slowly rise alongside I4 for a year.

Finally completed, the volcano called Krakatau is now erupting with multiple attractions, a restaurant and smaller, interactive areas. This, however, is only one pixel of a larger picture.

The new land is comprised of four villages: the Volcano area, the Wave Village, the River Village, and the Rain Forest Village.  There are eighteen attractions between all of them that vary in intensity. Everything from lazy rivers to plunging slides canvas the 53-acre plot. There is even an “aqua coaster” complete with a waterfall and drop for adventurous families. The park prides itself on its newest technology, the TapuTapu Wearable which boasts of many features as we previously reported. Primarily, the wristbands eliminate the burden of waiting in line and alert the wearer when it is their time to experience each attraction. Additionally, the bands enhance the sense of fun due to interactive elements in the park that the wearable triggers. These bands must be turned in at the end of your park day, and Volcano Bay Team Members are very diligent about retrieving them from guests. The food of Volcano Bay is also of note. With over 60 different selections on the various menus, Universal has expanded the theming of the park into its food options. Many of the entrées reflect Polynesian culture and veer from the traditional and tired fast food options of standard water parks. Universal has really put its best foot forward with Volcano Bay. The innovative engineering of the attractions, the technology of the TapuTapu Wearables and the caliber of food offerings really raise the bar in the water park world.