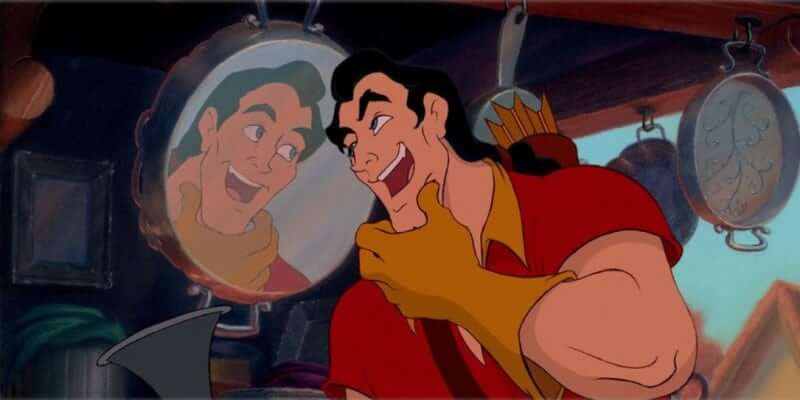 The self-centered and dangerously handsome Gaston is the focus of this ITM Villain Profile.

First appearing in Disney’s animated feature film, “Beauty and the Beast,” this man’s man with an ego to match is a tall muscular, dark haired huntsman adorned in red tunic and yellow gloves whose misogynistic personality has been compared to a “the ultimate dumb jock”.  He’s the first of his kind for a Disney story, in that he is portrayed as attractive, heroic and even considered a most eligible bachelor with no overt evil agenda or magical abilities. With an ego fed by his followers and a comfort zone set squarely in a self-absorbing spot light, Gaston is used to having his way.  It’s Belle’s rejection of his bombastic wedding proposal that starts Gaston on a path of jealousy.  The pivotal decent into the darkness of his boiling-over jealousy is fully realized in the call to “KILL THE BEAST!”  This rallying of the town’s people can be compared to the angry mob in the classic horror film “Frankenstein” (and some have even compared the call to arms to the actions of a certain WWII dictator). Ultimately the ugliness within becomes his true outward nature and by the end of the story Gaston has transformed to the tale’s true monster.

Gaston was portrayed by Hugh “Wolverine” Jackman in the Australian stage production of “Beauty and the Beast” (Donny Osmond was one of several to assume the role on Broadway).

The conceited bully has also appeared in “House of Mouse” and “Sing Me a Story with Belle.”  Gaston has made two appearances on ABC’s “Once Upon a Time.” Video game enthusiasts can expect to encounter the red- shirted hunter in several Disney games including “Epic Mickey: Power of Illusion,” “Kingdom Hearts,” “Beauty and the Beast: Belle’s Quest,” and “the Beast: Roar of the Beast.”

Guests traveling to Walt Disney World’s Magic Kingdom in Florida have encountered Gaston basking in his own glory just outside of the tavern bearing his name (located in the Fantasyland expansion area, near Beast’s castle.  Complete with bulging bi-ceps, the popular villain also appears just outside Fantasy Faire in Disneyland (Anaheim CA). VIDEO: See more of “Gaston” performed by Josh Gad and Luke Evans in Disney’s new “Beauty and the Beast”

Comments Off on Disney Villain Profile: From movies to theme parks to Broadway – No one gloats like Gaston